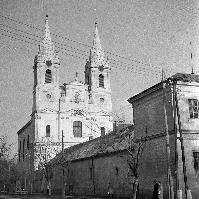 Congregation of Zirc of the Cistercian Order

In 1859, in the region of the former Habsburg Empire, the Congregatio Austriaca came into being, and the Cistercian Abbey of Zirc was part of it. The Austro-Hungarian Empire fell apart in 1918, and at the time, the Cistercians of Hungary had formed their own independent congregation to suit their particular circumstances. In 1923, Pope Pius XI established the Congregation of Zirc of the Cistercian Order, centred in Zirc with the Abbot of Zirc as its head. At the time, the following belonged to it: the abbey of Szentgotthárd, under the abbot of Zirc; also the monastic houses of Eger, Székesfehérvár, Pécs, Baja, Buda, and Előszállás, and the study house of Budapest. From 1947 to 1977, the American Spring Bank priory (located in Wisconsin, and as of 1963 an abbey), attended mostly by Hungarian Cistercians; from 1955 the priory of Dallas (an abbey as of 1963), founded by the Hungarian Cistercians; finally, in 1996, the abbey of the Cistercian sisters, The House of the Blessed Virgin at Kismaros, became a member of the Congregation of Zirc. After lengthy preparatory work, the constitution of the Congregation of Zirc was approved by the Holy See in 1941.

In Hungary, on 7 September 1950, the government prohibited the functioning of almost all the monastic orders, including that of the Cistercians. In 1989, when the monastic orders were again permitted to operate, the Congregation of Zirc needed a new constitution because of the changed circumstances, as there were two abbeys by then (Zirc and Dallas), and from 1996 a third abbey, that of Kismaros, which belonged to the Congregation. In 1991 and again in 2000, the Holy See approved the new constitution of the Congregation of Zirc. The president of the Congregation, its Abbot President, was always the abbot of Zirc, and the members of its general meetings and chapters were the governing abbots and the chosen delegates of the abbeys.

The GDR introduced conscription for all males in 1962. Apart from complete refusal to partake in military service, opting to become a construction soldier offered the only other possibility for unarmed service. Construction soldiers were distinguished by a small shovel on their uniforms and built military facilities, served as orderlies in hospitals, but also later as gardeners, kitchen assistants and finally, as laborers. Construction soldiers were often subject to harassment and their social prospects upon completing their military service were dismal.

The informal network of former construction soldiers offered an important and reliable basis for the peace movement, as well as a bloc which advocated for civil service (instead of military service) and peace education initiatives. Between 1964 and 1989, nearly 15,000 men had served in the National People’s Army as construction soldiers. Rainer Eppelmann (the last Defense Minister of the GDR; „Minister for Disarmament and Defense“), the future mayor of Leipzig, Wolfgang Tiefensee, the poet Bert Papenfuß and the songwriter Gerhard Schöne are among the most prominent former construction soldiers.

The Contemporary History Section is part of the Modern and Contemporary History Department, established in 1965. The long years of collecting activity of the museum curators covers the political, economic, cultural and everyday life of Ruse in the period of socialism and post-socialism. The newest tendency in the collecting work of the section is the recording of oral narratives from the period of socialism and democracy, using the "Oral History" method for their storing and examination. The overall fund collection of the section contains approximately 10 000 inventory pieces.

The section has no permanent exhibition, but presents different temporary exhibitions: “The Political Poster”, “125 Years of Maritime Fleet”, together with the Modern History Section and the Maritime Museum in Varna, etc.
The research activity of the specialists covers issues of the political, cultural and public life of Ruse and the region, as well as an ethnological research on the problems of the everyday culture of the industrial town.
The curators at the section "Contemporary History" in 2017 are Vladislav Atanasov and Iskren Velikov, both working at the section since 2009.

The Costume Society of America (CSA) is a 501(c)(3) non-profit organization founded on March 23, 1973, and incorporated in the state of New York on September 12, 1973. CSA promotes its goals with national symposia and publications including the annual journal Dress and its monthly electronic newsletter CSA E-News. In 1978, the organization also began forming regional groups. There are now six in the United States and Canada, and one international group. Individual regions hold annual meetings, sponsor programs and publish newsletters.