The A-Cyclists group was one of the first anarchists' organisations in Warsaw in the 1980s. The group was established around the year 1987-1988 by the teenagers from Warsaw's secondary schools, especially the one for the so-called "difficult youth". The A-Cyclists collective was relatively small, from a few to about dozen of members, but tens or even hundreds of participants gathered in the actions organised by the group. Members of the A-Cyclists group had different experiences, from engagement into hard-core punk music and alternative culture to participation in the demonstrations organised by the "Solidarity" union, Freedom and Peace movement, and Polish Socialist Party-Democratic Revolution fraction. Some of them for the first time committed to the political activism.

The A-Cyclists group has never been institutionalised nor has their archive collected by the group since 1988. The collective chose to be an unofficial, informal cooperation of young anarchists. They organised political demonstrations and street happenings as well as created alternative art, theatre, and poetry. Their regular meeting and discussions took place at the Institute of Sociology at the University of Warsaw. In 1989 A-Cyclists participated in the occupation of the University of Warsaw set up as an element of the strive to the legitimization of the Independent Students' Union. The anarchists several times fought in the street battles against police forces, they also combated the skinheads and neo-Nazis.

The climax of A-Cyclists' activities took place on years 1989-1991 when the dramatic and unprecedented events of transition from the state socialism toward capitalist liberal democracy gave young people the hope that there is a possibility for the revolution against both socialism and capitalism. After 1991 majority of the group got involved in the Anarchist Federation while the others resigned from the political activism at all.

lasīt vairāk
A. D. Xenopol Institute of History of the Romanian Academy (Iași)

The A.D. Xenopol Institute of History in Iași is a specialised research division of the Romanian Academy. The activity of this institution focuses on studying Romanian and European history. The A.D. Xenopol Institute of Romanian History, attached to the Faculty of Letters and Philosophy of the University of Iași, was founded in 1940. It was headed by Ilie Minea. Thus, Iași gained its own institution of historical research, similar to the other two big university centres, Bucharest and Cluj, where national and world history institutes had been functioning for a long time. On 25 May 1943, this institute became a separate legal entity, under the name of the A.D. Xenopol Institute of National History, affiliated with the University of Iași. It functioned under the authority of the Ministry of National Culture and Religious Affairs. After the radical reform of the educational system and the Romanian Academy enacted in 1948, which created large research institutes with a strictly planned collective activity, according to the Soviet model, the A.D. Xenopol Institute of National History ceased to exist, becoming, from 1949, a section of the Institute of History and Philology of the Academy of the Romanian People’s Republic – Iași Branch. The activity of the history section was coordinated and led by Professor Valerian Popovici. The section comprised medieval and modern history sectors. From 1953, a sector specialised in the field of ancient history and archaeology was added. In 1958, a new subdivision dealing with contemporary history was created. Following another stage of reorganisation, in 1964 a separate Institute of History and Archaeology was established. From 1965, it regained its old name – A.D. Xenopol. In 1967, a separate section focusing on world history was created within the Institute. Its leadership was taken over by Professor Mircea Petrescu-Dîmbovița. After the creation, in 1970, of the Academy of Social and Political Sciences of the Socialist Republic of Romania, the A.D. Xenopol Institute of History and Archaeology was professionally subordinated to the new institution. From an administrative point of view, until 1975 the Institute was affiliated with the Iași Branch of the Academy of the Socialist Republic of Romania. That year, the Institute was integrated into the Faculty of History and Philosophy of Al. I. Cuza University of Iași. Until the fall of communism, the institute had a dual subordination: to the Academy of Social and Political Sciences and to the Ministry of Education. In 1981, the Institute was reorganised into separate research departments (colective), according to the main research interests of the Iași-based historians: the department of prehistory; the Dacian and Roman archaeology department; the feudal archaeology section; the modern methods in archaeology group; the medieval history department; the modern history section; the contemporary history department; the department of the history of international relations; the history of the Second World War section; and the department of the history of culture. In early 1990, the Institute was transferred under the aegis of the Romanian Academy. Shortly thereafter, the former Archaeology Section was established as a separate Institute of Archaeology, while the History Section continued as a separate A.D. Xenopol Institute of History, under the leadership of Professor Alexandru Zub. After 1990, the Institute consisted of five research departments: history of the Middle Ages; modern history; contemporary history; history of international relations, and history of culture. At present, twenty-five researchers and three members of administrative staff (including a librarian) are employed at the A.D. Xenopol Institute of History. The library is designed primarily to support the research and academic work of the historians affiliated with the Institute. Therefore, it is not a public library. However, although it employs only one librarian, it provides open access to Al. I. Cuza University staff and students, and also to other interested researchers. The library’s collection amounts to over 50,000 books and over 900 journals (totalling several thousand volumes of periodicals). 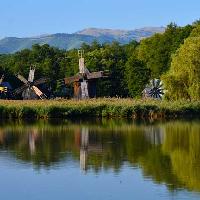 The ASTRA National Museum Complex (or in short ASTRA Museum) is one of the largest ethnographic museums in Europe. Its open-air exhibition includes over 400 monuments of peasant architecture and technology covering a surface of approximately forty hectares. The origins of the museum can be found in the ethnographic collections assembled by the Transylvanian Association for Romanian Literature and the Culture of the Romanian People (Asociaţiunea Transilvană pentru Literatura Română şi Cultura Poporului Română or in short ASTRA), an institution that played a major role in the cultural emancipation of Transylvanian Romanians after its establishment in 1861. These collections, assembled beginning with the second half of the nineteenth century, were exhibited at the ASTRA Museum that opened in 1905 in the palace built by the Association for this purpose in the centre of Sibiu. In 1931, the museum already owned over 11,000 ethnographic pieces from Transylvania. After 1918, Transylvania’s integration into the Kingdom of Romania meant the start of a new era in the development of the institution, which now received financial support from the Romanian government. In 1950, two years after the establishment of the communist regime, the ASTRA Museum was closed because the ASTRA Association was perceived as a cultural institution of the Romanian bourgeoisie in Transylvania. As a result, the ethnographic collection was transferred into the custody of the Brukenthal Museum.
In 1956, Cornel Irimie founded the Museum’s Folk Art Section by starting from the collection inherited from the ASTRA Museum. In 1963, on Irimie’s initiative the open-air Museum of Folk Technics (Muzeul Tehnicii Populare) was established on the outskirts of Sibiu. It includes, among other things, peasant dwellings and many artefacts created by craftsmen. Administratively, the new museum, open to the public in 1967, was in fact a department of the Brukenthal Museum. Between the 1960s and the 1980s, researchers and museologists from the Museum of Folk Technics conducted ethnographic field research on the religious beliefs of the rural population. The findings of this research can still be found in the archives of the ASTRA National Museum Complex.
In February 1990, by decision of the Sibiu Town Hall, the Museum of Traditional Folk Civilisation in Romania was established. This institution was independent from the Brukenthal Museum and took over the entire patrimony of the former Museum of Folk Technics. In September of the same year, by decision of the Ministry of Culture, the acronym ASTRA was added to the name of the recently-created museum as recognition of the kinship between the association’s former ASTRA Museum and the new ASTRA Museum. In 2001, the ASTRA National Museum Complex was founded. This structure included several ethnographic museums in Sibiu, such as the ASTRA Museum of Traditional Folk Civilisation, the Franz Binder Museum of World Ethnography, the ASTRA Museum of Transylvanian Civilisation, the Emil Sigerus Museum of Saxon Ethnography, and the projected Museum of Romany Culture and Civilisation. While the first museum in this complex continues with the tradition of the Museum of Folk Technics, founded by Cornel Irimie, the second reflects the ethnography of peoples from outside of the European area. The ASTRA Museum of Transylvanian Civilisation at present owns the collections inherited from the old ASTRA Museum, while the Emil Sigerius Museum of Saxon Ethnography displays the ethnographic collections portraying the rural civilisation of the Transylvanian Saxons. The future Museum of Romany Culture and Civilisation will exhibit the collections related to the culture and traditional crafts of the Roma people, which are at present owned by the ASTRA National Museum Complex. Beside these museums, the ASTRA museum complex also includes a department of anthropological documentary film, one of artefact conservation-restoration, one of museum studies and cultural marketing, a tourist information centre, and a publishing house (the ASTRA Museum Publishing House), as well as a project management department.

ATGENDER
ATGENDER, The European Association for Gender Research, Education and Documentation, is a broad association for academics, practitioners, activists and institutions in the field of women’s and gender studies, feminist research, women’s rights, gender equality and diversity.

Source: https://atgender.eu/about/mission/
lasīt vairāk
Abagar Bulgarian Catholic Literary Archive
The Abagar Bulgarian Catholic Literary Archive was founded in 1981 by Monsignor Georgi Eldarov in Rome. It was a collection of many thousands of Bulgarian books and materials related to Bulgarian history from the late eighteenth century until the 1990s, including rare historical publications, such as from the Robert College in Istanbul and the Bulgarian Uniate Church. The collection also included materials collected from Bulgarians living outside Bulgaria, but who were closely associated with its history and culture.

Although the Bulgarian communist regime was hostile to the Catholic Church, the center was visited by Bulgarian historians - active members of the Bulgarian Communist Party (Aksinia Dzhurova, Bozhidar Dimitrov, etc.).

The archive of the Abagar cultural center was moved from Rome to Bulgaria in 1997. The Abagar Foundation, established at that time, took care of the archive. A year after the death of Prof. Eldarov in 2011 a woman in Sofia was arrested for illegally selling objects from the archive; the ultimate fate of the archive material is, unfortunately, unknown.