84 atrastās personas
Vienumi lappusē:       «« iepriekšējā lappuse 1 ... 6 7 8 9 10 11 12 13 14 ... 16 17 nākošā lappuse »»
Mihle, Rudolf
Rudolf Mihle (1937–2008) was one of the most important amateur filmmakers in socialist Czechoslovakia and long-standing member of the Czech Club of Amateur Filmmakers. He made around ninety films, mostly documentaries and news reports. He was trained to be a sign painter. However, soon after he had finished his training, he became an amateur filmmaker. His first movies depicted the milieu of sign painters; he later started to choose topics that were controversial and critical of society and the socialist economy. Some of his films had political messages and were banned, for example the film “Without Name” about Stalin’s cult of personality (1964), the film “Mini-History 1918–1968” about the establishment of the first Czechoslovak state in 1918 (1968) or “First Hours of Occupation” about the Soviet intervention in Czechoslovakia (1968). That is why Mihle is remembered as a “rebel” or as someone who was not afraid to show his disagreement with state authorities. However, Rudolf Mihle was not a prohibited artist and could still work as an amateur filmmaker. Apart from these films, his movies with ecological themes or his works focused on the history of Czech amateur film are appreciated as well. Rudolf Mihle took part in around 170 competitions and won around hundred prizes.
Rudolf Mihle was interested in preserving the history and memory of Czechoslovak and Czech amateur film. Thus, he decided to donate his written materials and films (reels, videotapes) to the National Film Archives (NFA) in 2000, eight years before his death.
lasīt vairāk 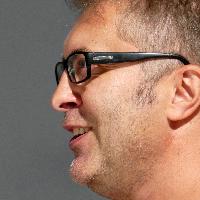 Milenković, Nebojša
Nebojša Milenković was born in 1971 in Niš. He graduated from the Department of Art History (Faculty of Philosophy) at the University of Belgrade. He is an art historian and museum advisor. He has previously worked in the gallery of Laza Kostić Cultural Centre in Sombor, and has worked in the Museum of Contemporary Art of Vojvodina since 2002. He is in charge of MCAV’s conceptual art collection, his field of expertise. MCAV’s conceptual art collection is the only one of its kind in the region. He is also engaged in politics and is an activist.

In his work as an art historian, Milenković has focused on “utopic art projects, groups and individuals who share a vision of art as a spiritual practice that is capable of changing the world – these are predominantly conceptual artists and representatives of alternative culture.” He has published ten monographs on conceptual artists, among whom are Slavko Matković, Bálint Szombathy, Vujica Rešin Tucić, Vladimir Kopicl, Slobodan Šijan and Božidar Mandić. He is one of the curators of the exhibition Examples of Invisible Art (Digitalizing the Collection of Conceptual Art of MCAV).

Milenković describes the neo-avantgarde scene of the 1970s in Novi Sad as the main subject of his professional interest “because it is one of those rare periods in Yugoslav and Serbian culture when local art and culture are side by side with many contemporary trends in the global scene.”

lasīt vairāk
Milewski, Wacław
Wacław Milewski was Keeper of Archives at the Polish Institute and Sikorski Museum from 1980 to 1989. In 1998, Milewski processed and described Aniela Mieczysławska Raczyńska Collection. Soldier of the Polish Home Army in occupied Poland, Milewski later served in the Polish 2nd Corps in Italy with the 25th Lancers Regiment. After demobilization of the Polish armed forces in the West, he underwent officers’ training course in the special Polish officers’ training school in Britain. Milewski volunteered in the Institute in 1963 and has remained with the Institute to this day. He held several positions. He was the Curator of the Museum for a while and then in the early ‘70s he became deputy Keeper of Archives to Regina Oppman who was Keeper of Archives from 1951 until her death in 1980. Then he took over as Keeper of Archives until his retirement in 1989. From then he worked as a volunteer in the Archives with the Institute and as the building administrator. He currently lives in a nursing home in London.
lasīt vairāk 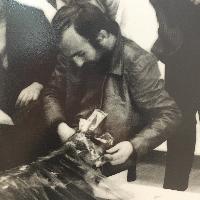 Era Milivojević was born in 1944 in Užiće. In 1971, he graduated in painting at the Academy of Fine Arts in Belgrade in the class of Professor Stojan Ćelić. He has participated in a large number of exhibitions and performances in Yugoslavia, Serbia and abroad. His works are displayed in museums and other public and private collections. Era Milivojević lives in Belgrade.

lasīt vairāk
Miller, Krzysztof
Krzysztof Miller (1962-2016) was a photographer and reporter famous for his characteristic, emotionally committed style and the coverages of the arm conflicts, revolutions, and social disasters.

From 1976 to 1986 Miller was a sportsman and a champion in diving in Polish People's Republic. From 1986 he was a photographer associated with the second circuit. His photographs were published in the independent dissident press and bulletins. From 1988 he collaborated with the Independent Students' Association. He documented, among other events, many happenings by the Gallery of Maniacal Activities in Łódź. In 1989 he had become a photo reporter in "Gazeta Wyborcza" where he worked the whole next decade till 2000, when he had to slow down due to his health problems.

In the 1990s Miller made his career traveling the world with the journalist Wojciech Jagielski and documenting wars, revolutions, and other breakthrough events. His photo reportages covered events in the Balkans, Romania, Georgia, Chechnya, Afghanistan, and South Africa. The distinctive feature of Miller's photographs was the concern for the situation of the people and the empathy toward them. Such a committed style of photojournalism made him famous in Poland and abroad. In 2000 he was a member of the jury of the World Press Photo contest. After that year Miller started studying at the Film School in Łódź, where he co-founded groups Slowphoto and Artists 24h. During the studies in Łódź Miller developed the artistic side of his earlier journalist photographs. The experiments with the photographic techniques resulted in Miller's participation in many exhibitions in 2009 and 2014.
lasīt vairāk
46 - 50
«« iepriekšējā lappuse 1 ... 6 7 8 9 10 11 12 13 14 ... 16 17 nākošā lappuse »»