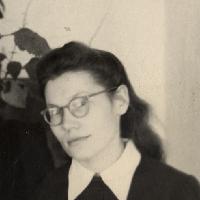 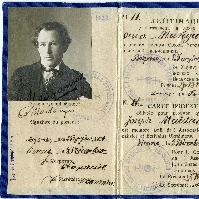 Maidaniuk, Osyp
Osyp Maidaniuk was an artist born in the city of Kamianets-Podilskyi in 1886. He was trained in several academies, mainly in Kyiv and Odessa, before teaching the art of painting and history of art at the Academy of Lemberg (Lwów, and now Lviv) before the First World War. According to a letter written by his wife Elsa, he was imprisoned by the Russians during WWI and was on his way to Murmansk, before being liberated by Swedes in Finland. Maidaniuk moved to Stockholm, where he later was appointed secretary of the Ukrainian legation, which was also responsible for relations with Norway and Finland following the Ukrainian People's Republic's declaration of independence in 1918. The following year Maidaniuk resigned in order to return to working as an artist. Nonetheless, with the sum of of money he received upon his resignation, he opened a Ukrainian information bureau in Stockholm.

These papers were part of a larger transfer of documentation from former UNR diplomats and government representatives to archives in North America, in particular to the Ukrainian Museum-Archives in Cleveland. Despite the transfer of the Evhen Batchinksky papers to Carleton University in Canada, the UMA retains quite a bit of documentation from this period, thanks to the Maidaniuk papers and other materials that were not transferred to Carleton in the 1970s. This documentation shows very early and committed opposition to communism, in particular to the Bolshevik Revolution. Alongside other political visions articulated during the collapse of the Russian Empire in 1917, representatives of the Ukrainian People's Republic declared independence for Ukraine and worked hard to establish diplomatic relations during the liminal period between the collapse of empire and the establishment of the Soviet Union in 1922. These documents provide an important window into the roots of cultural opposition to communism in Ukraine, highlighting nettlesome issues that remain unresolved to this day.
lasīt vairāk 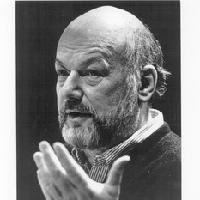 Makavejev, Dušan
Dušan Makavejev, born October 13th, 1932 in Belgrade, is a Yugoslavian film director. He graduated with a bachelor degree in psychology from the Faculty of Philosophy in Belgrade, and played a prominent role in student demonstrations in 1968.

Makavejev is one of the founders of the Black Wave, a movement of Yugoslav cinematography. His movies criticize the rotten nature of society, from both communist and capitalist influence. As a supporter of the psychologist Wilhelm Reich, Makavejev often composes his studies into his films. His film Misterije organizma [Mysteries of Organism] (1971) pays homage to Reich'srevolutionary-psychology, never widely recognized.Though the film was banned in Yugoslavia soon after its premiere it was screened again a decade later, in the 1980s.

Makavejev has been the editor of magazines including Student, Književne novine, and Danas. He has also written film reviews and articles on social for many publications, including Polja. In 1958, he published a scenario,“for Godless ballet with pantomime,” as he called it,under the title “Hardboiled Hearts”(Polja, Issue 34, 1958),  as a satirical comment on the cultural situation in Yugoslavia. In his later texts, such as “A Bit of Man-eater, A Bit of Philistine”" (Polja, Issue 45, April 1960), and “Young Intellectual Today” (Polja, Issue 49/50, December 1960), Makavejev uses satire to critique Yugoslav society, especially its youth.

Makavejev emigrated to the United States in the early 1970s, where he lectured at Harvard University. He then returned to Serbia and currently lives in Belgrade.

He has won a number of domestic and foreign prizes, including  the Belgrade October Award, the Silver Bear in Berlin, the Silver Arena in Pula, the Luis Bunuel in Cannes, the Silver Hugo in Chicago, the Golden Age of the Belgian Royal Cinematheque, and the Film Legend, awarded by the Southeast European Film Festival in Paris.
lasīt vairāk
Malevich, Kazimir

Kazimir Malevich (b. 1879 in Kyiv and d. 1935 in Leningrad) is a leading member of the “Russian” avant-garde. Malevich was born to Polish parents in Kyiv, living in villages in the Ukrainian countryside until the age of 17. Art historians argue that Malevich’s early life had a deep impression on his work, his use of vibrant colors and his engagement with primitivism being two of the clearest examples. One of the pioneers of abstract art, Malevich was a central figure in a succession of avant-garde movements during the period of the Russian revolutions of 1905 and 1917 and immediately after. The style of severe geometric abstraction with which he is most closely associated, suprematism, was a leading force in the development of constructivism, the repercussions of which continued to be felt throughout the 20th century. Under increasing pressure from the authorities in Leningrad, Malevich traveled abroad, after the government closed the Leningrad GINK-hUK (State Institute of Artistic Culture) the year before. He participated in several exhibitions in Berlin and Warsaw in 1927 and sought for a way to remain abroad outside the reach of the increasingly conservative Soviet leadership. The Polish authorities denied him refugee status, believing him to be a true Bolshevik, even though his work was being suppressed along with that of other avant-garde artists. A group of Ukrainian officials and artists in Kyiv came to Malevich's aid, among them Ivan Vrona, who offered Malevich a teaching post at the Kyiv Art Institute, where the former served as rector. Malevich’s work was suppressed by the Soviet authorities in the 1930s and remained little known during the following two decades. The reassessment of his reputation in the West from the mid-1950s was matched by the renewed influence of his work on the paintings of Ad Reinhardt and on developments such as Zero, Hard-edge painting and Minimalism.