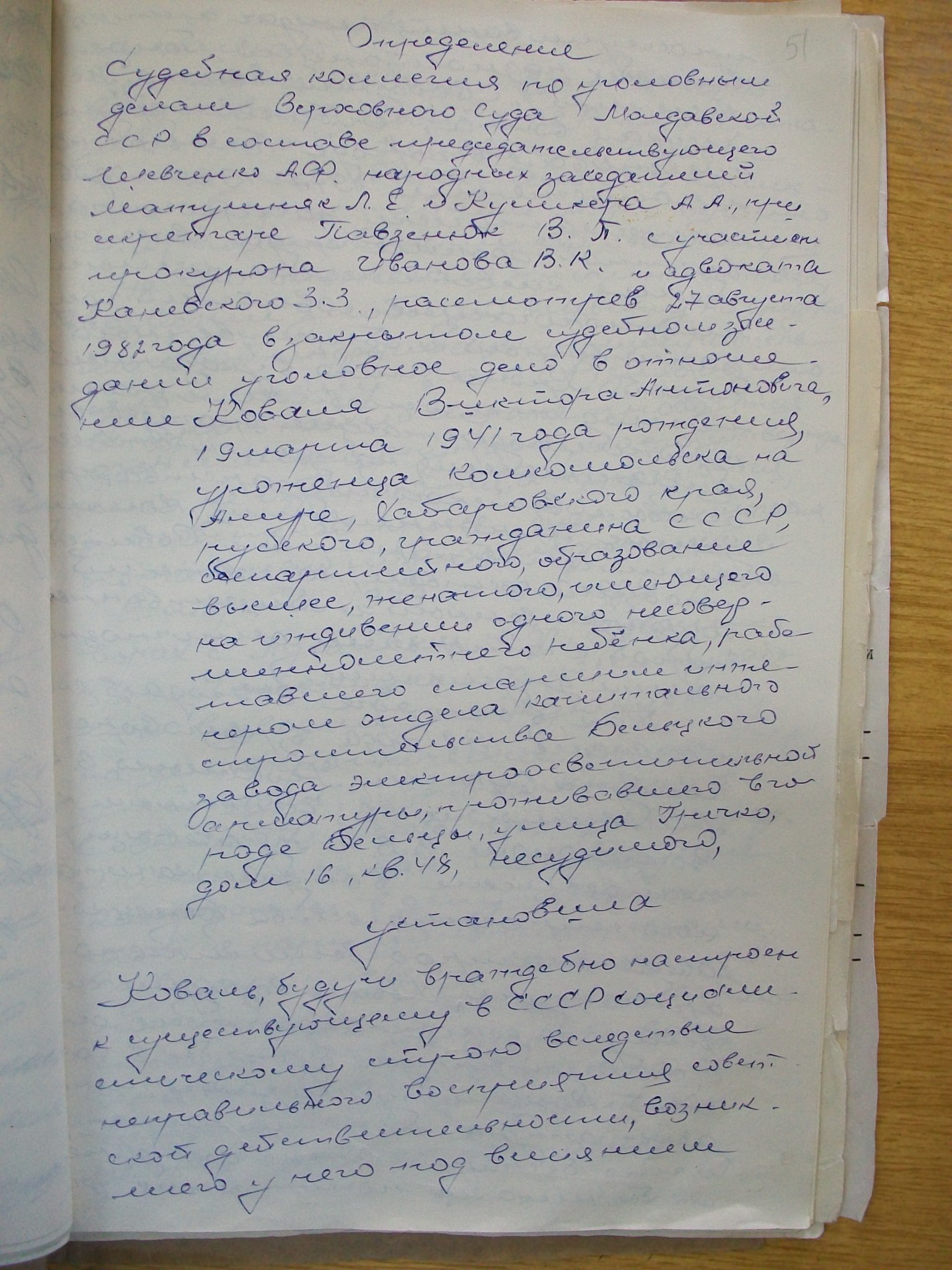 Following Viktor Koval’s trial, on 27 August 1982 the Penal Section of the Supreme Court of the Moldavian SSR issued a special decision (opredelenie) regarding his case. In effect, this document represented a surrogate of the official sentence. Similarly to the usual pattern of such documents, the court emphasised the defendant’s “hostile attitude” towards Soviet power. In Koval’s case this deviant behaviour was purportedly due to his “false perception of Soviet reality,” which was induced by his “listening to the broadcasts of the anti-Soviet radio stations Voice of America, Radio Free Europe, Deutsche Welle, BBC etc.” The document further summarised the defendant’s main anti-regime activities, which he undertook during 1977–1982. These included his criticism of “Soviet democracy,” his refusal to take part in the elections to the Supreme Soviet, his condemnation of the lies and distortions propagated by the Soviet press, his critical attitude toward Soviet foreign policy, in general, and the Soviet invasion of Afghanistan, in particular, and, most importantly, his open support for the Solidarity movement in Poland. The comparison between the Soviet political system and the political structure of Western countries was a constant theme in Koval’s conversations with his colleagues, which was allegedly proven by numerous witness accounts invoked in the document. Koval was also clearly aware that the Soviet state did not guarantee the basic civil rights of its citizens. This constituted another recurrent topic which emerged during the investigation. The authorities were particularly alarmed by Koval’s general critique of the Soviet system as a whole. The material evidence uncovered during searches of Koval’s apartment also contributed to the court’s ruling that the defendant had “committed a socially dangerous act” that fell under the provisions of article 203, part 1, of the Penal Code of the Moldavian SSR (“spreading calumnies and lies aimed at discrediting the Soviet state and social order”). However, based on the conclusions of the psychiatric assessment, the court found that Koval exhibited signs of a mental illness and personality disorder. It therefore declared him mentally unfit and thus exempt from criminal responsibility. He was thus sent to a special psychiatric facility in Dnepropetrovsk (Ukraine) for “forced medical treatment.” Most of Koval’s papers and documents confiscated by the KGB were temporarily kept as a part of his file, while the rest were returned to his wife. This case is one of the most blatant examples of the application of punitive psychology in the MSSR during the late Soviet period. Koval’s political opposition to the regime, although it never transcended the individual level, was perceived as serious enough to warrant harsh repressive measures camouflaged under the “humane” rhetoric of a medical case.