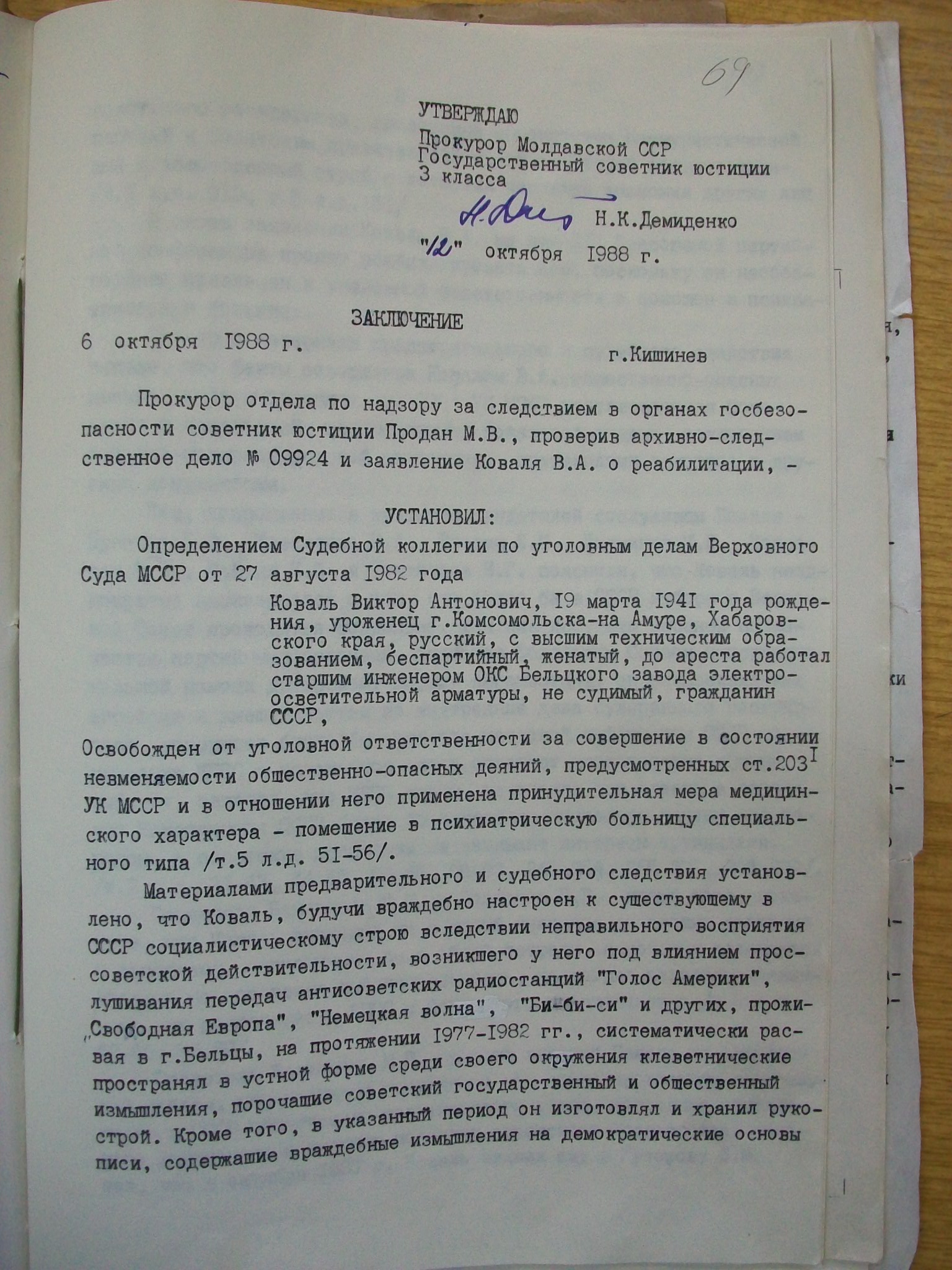 On the occasion of the nineteenth Party conference, held in Moscow in late June 1988, in the context of the increasingly obvious reformist tendencies of the late Perestroika period, Viktor Koval filed a petition requesting the revision of his case, his full rehabilitation, and his release from the psychiatric hospital. This petition was examined by the Prosecutor General’s Office of the Moldavian SSR in early October 1988. On 6 October, the special prosecutor responsible for supervising KGB investigations, M. V. Prodan, issued a special resolution denying Koval’s request and upholding the earlier decision of the Supreme Court. This resolution was approved by the General Prosecutor of the Moldavian SSR, N. K. Demidenko, six days later, on 12 October. This document is especially significant as it shows the reluctance of the Soviet justice system to acknowledge the repressive character of punitive psychiatry (and thus its own subservience to the regime) even as late as 1988, despite the general atmosphere of liberalisation. The prosecutor based his decision on the fact that Koval’s purported “socially dangerous acts” were confirmed by “the witness accounts, the material evidence, the conclusions of the psychiatric assessment, and the evaluation of the defendant’s handwriting,” as well as by other documents from the KGB file. After reviewing these materials, the prosecutor concluded that Koval’s assertions and papers comprised “certain well-founded critical remarks concerning the imperfections of our socialist society. At the same time, the essence of his activity did not focus on the criticism of the existing flaws in order to remove them from society. Rather, he constantly emphasised the advantages of the capitalist system and the Western way of life, and used rude and insulting expressions in connection with the role of the ruling communist party. He also stated demagogically that the people lacked any rights, that the country was ruled through fascist methods, and that the people were exploited. His main goal is obvious – to discredit the socialist order and the system of state power.” This assessment provided a glimpse into the logic of the regime’s actions and into the reasons for qualifying Koval’s case of political opposition as particularly dangerous. Although ritualistically invoking the results of the psychiatric assessment, the prosecutor in fact synthesised the regime’s attitude toward Koval’s and other similar examples of “ideological deviance.” It is not surprising that the official found the decision to subject Koval to forced medical treatment to be “correct” and rejected his petition for rehabilitation as “unfounded.” However, the prosecutor’s arguments seem more sincere and less euphemistic than earlier instances of comparable legal documents, probably reflecting a slight change in emphasis (if not in essence). Koval’s release from hospital only occurred in May 1990, when the article incriminating him was excluded from the Penal Code. His final rehabilitation followed in November 1991, when the Moldovan Supreme Court annulled the previous judicial decisions and openly admitted that Koval had suffered for his political opinions. However, even on that occasion punitive psychiatry as such was not officially condemned by the Moldovan justice system. It was only following a recommendation of the Presidential Commission for the Study and Evaluation of the Communist Regime in Moldova that the government officially condemned the use of psychiatric hospitals as a major strategy for the repression of dissent during the later stages of the Soviet regime.