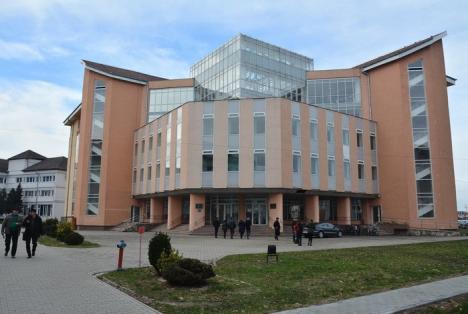 Oradea University Library is affiliated to the University of Oradea. The library is financed by and subordinated to the Ministry of National Education and Scientific Research. It has a collection of more than 336,000 books, magazines, newspapers, CDs, and DVDs. The collection is constantly growing through acquisitions, exchanges with more than sixty partners, and donations from professors of the University of Oradea and from other universities and personalities of Romanian cultural and political life. The library also houses many items of cultural heritage, such as manuscripts, old books, prints, and photographs.

The history of Oradea University Library started in 1963. In that year an Institute of Pedagogy was founded in Oradea and a new library was created to serve the needs of its students. Due to the interest of the communist regime in technical education, the Institute of Pedagogy was reorganised in 1976 as a branch of the Polytehnic Institute in Cluj-Napoca. Its educational programmes focused on training the future sub-engineers needed by the growing Romanian industry. As a result, the library, which already held an impressive number of volumes on the humanities, was forced to enrich its collection mainly with technical publications. After the fall of the communist regime, the educational institution in Oradea was transformed into the Technical University (1990), to become one year later the University of Oradea. The development of the higher educational system in Oradea, which now includes fifteen faculties, has impacted on the structure of the University Library. From a small library holding mainly technical publications it has become one of the most important libraries in Romania, whose collections manage to meet the demands of the growing number of students in university city of Oradea. Since 2010 the library has been housed in a new modern building with five large reading rooms and six book depositories (Barta and Culiciu 2013, 130–174).

Oradea University Library is made up of a central unit and branches serving 15 faculties of the University of Oradea. The central unit is also divided into departments on the basis of their activity, and includes units such as: “Acquisitions and inventory of publications office”; “Public relations office”;“Periodicals office”; and “Information technology office.” Oradea University Library hosts many collections which reflect the cultural opposition against the communist regime, such as the Monica Lovinescu–Virgil Ierunca Collection and the Mircea Zaciu Collection.