4 atrastās kolekcijas
Vienumi lappusē:       1
Filmoteka of the Museum of Modern Art in Warsaw
1970s witnessed the birth of Polish neo-avant-garde milieu of film artists. Their works constitute the core of the impressive collection of short and experimental films created by visual artists. Polish 20th and 21st century art abounded in interesting productions of this kind, which today are known as video art. Filmoteka is a department of the Museum of Modern Art in Warsaw, which conducts research, collects, digitalises, and publishes aforementioned films to general public.
lasīt vairāk

The Fine Art Archive consists of diverse documents connected to Czech and Slovak art of the twentieth and twenty first century. Catalogues, books, invitations, journals, photography, slides, cuts and other items have been gathered continuously since the mid-1980s. 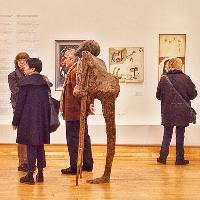 Forms of Resistance in Fine Arts

The temporary collection "Forms of Resistance" is dedicated to the artistic opposition against the communist regime in Bulgaria from 1944 to 1985. The exhibition highlights different forms of repression against particular artists at particular moments during the period of state socialism. It also shows the active role of some painters, as well as their forms of resistance against the dogmas of Socialist Realism and against ideological guidance. The upper time limit is the beginning of the perestroika in the Soviet Union, which marks the beginning of the final disintegration of the system of state socialism, also with regard to the political control of arts.