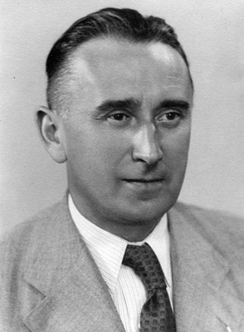 Ladislav Karel Feierabend was an important Czechoslovak politician and economist. From 1938 to 1939 he was the minister of agriculture. After he went into exile in London in 1940, he held the post of Czechoslovak finance minister in the Czechoslovak government-in-exile in London. Feierabend was a member of the Republican Party of Farmers and Peasants and after the war he joined the Czech National Social Party. After the Communist coup in February 1948, Feierabend decided to emigrate from Czechoslovakia. First of all, he went to London and then to the United States of America, where he actively participated in the radio station, Voice of America, between 1965 and 1969. He was also involved in the Czechoslovak Society of Arts and Sciences in Washington.