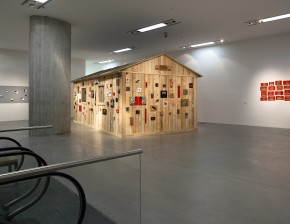 Stilinović's retrospective exhibition with the ironic title Zero for Conduct, was held at the Museum of Contemporary Art in Zagreb from 30 November 2012 to 3 February 2013. Tihomir Milovac, the curator of the exhibition, came up with the title Zero for Conduct, which refers to the movie of the same name directed by Jean Vigo in the 1930s. Milovac wanted this title to underscore Stilinović's anarchism, the struggle against institutions, and the intractable artistic nature that is strongly present in his work.

The retrospective covers the period from Stilinović's first films in the early 1970s, the early series of photographs of Mayday 1975 to recent photographs such as the Chinese propaganda from 2001. The works from the cycles "Money," "Economy," "Geometry of Cakes,˝ "In Praise of Laziness," "Work is a Disease," and the "Exploitation of the Dead" are presented. The exhibition was well attended by the public, and received good media coverage.