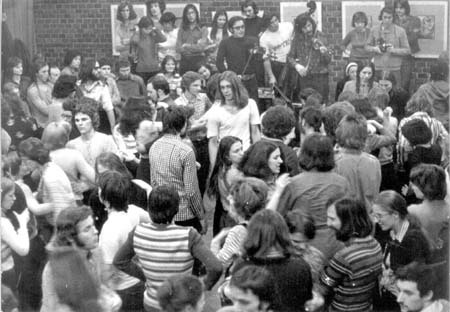 The first private dance house was opened on 6 May 1972 in the Book Club at Liszt Ferenc Square in Budapest, where Ferenc Novák and his followers showed the simple form of the “széki” dance (Szék, Sic is a Romanian village). The event was organized by dancers of the Bihari Dance Ensemble, Jolán Foltin, Lajos Lelkes, and Antal Stoller. The dancers of the Bartók, the Vadrózsák, and the Vasas Dance Ensembles also took part in it; the music was provided by Béla Halmos, Ferenc Sebő, and Péter Éri. The main supporter of the event was György Martin. He helped Béla Halmos and Ferenc Sebő too. Martin showed them the Collection of Szék by László Lajtha and other records what later became the music collection of the dance house movement. Halmos and Sebő learnt from Sándor Tímár in 1971 how to play music for dancers.

“Music and dance like in Szék” was written on the invitation for the first private dance house in 1972. Opposite the entrance, there was a photo by Péter Korniss who also spent a lot of time in Szék and documented traditional Transylvanian peasant culture. At the door, Lajos Lelkes and Antal Stoller gave the guests a welcome similar to the welcome they would get in Szék. Originally the organizers wanted to reconstruct the traditional dance house of Szék, but later there were also ethnographical and sociological lectures at the dance houses.

In 1972, there were three more private dance houses at the Book Club.

Over the course of the years, the dance houses in Budapest became more and more popular. Young people had chances to learn and hear about that information and ideas which were not allowed at schools or universities. The HVDSZ, VDSZ, VASAS, ÉPÍTŐK were the main Ensembles at the dance houses. From 1973 the members of the Bartók Dance Ensembles taught folk dances at Fővárosi Művelődési Ház. New folk music bands were founded which resembled Muzsikás, and the dance house movement became popular at all around Hungary.