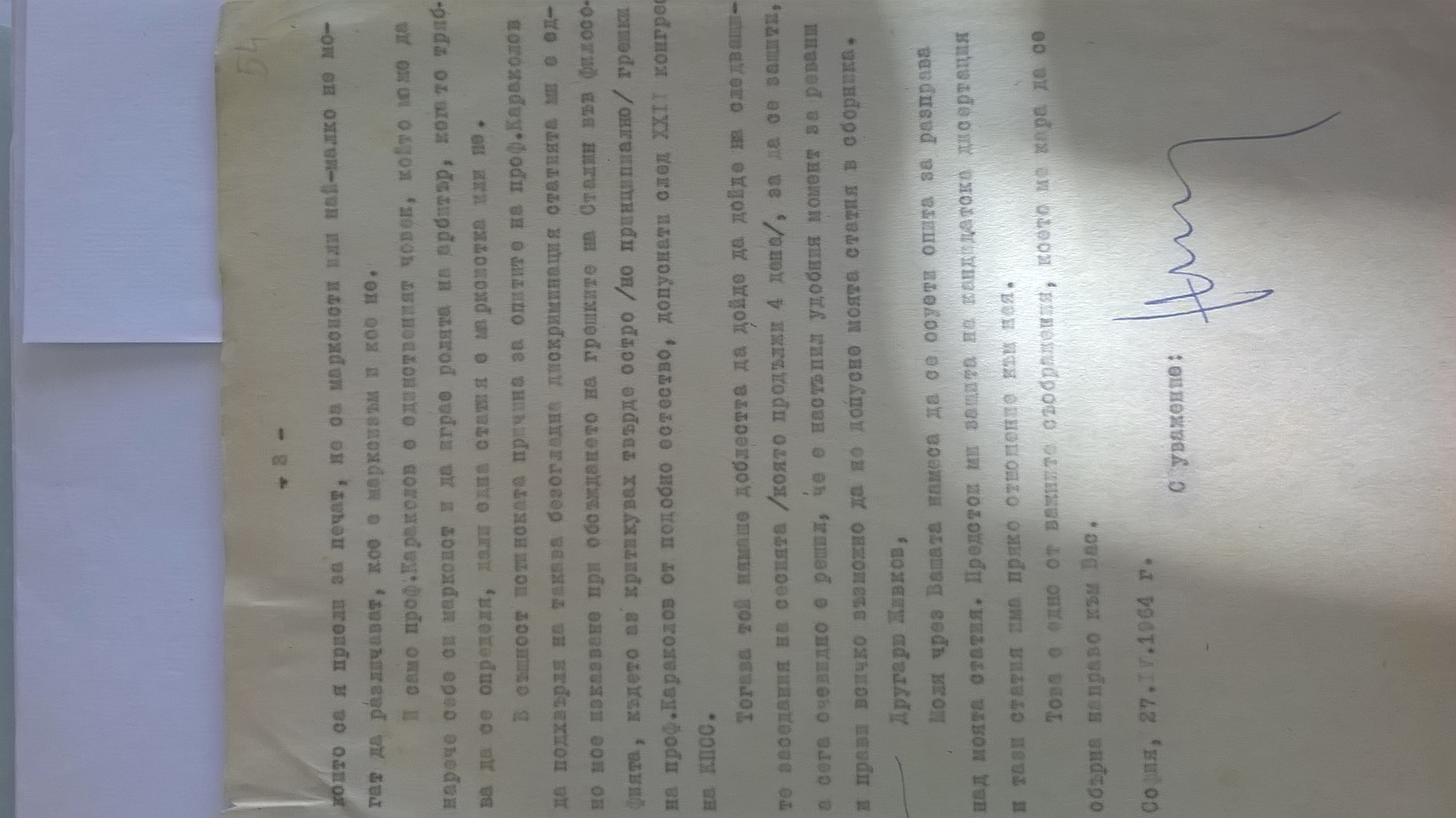 This featured item contains documents relating to Zhelyu Zhelev’s article “The Material and the Immaterial” [Bitie i nebitie] in which he criticized Lenin’s materialist philosophy. Zhelev wrote this article as a PhD student at the end of 1963, during a period of relative scientific and cultural freedom. The article was evaluated positively by three scholars, unanimously accepted by the Department of Logic (about 10 people), and approved by the Department of Dialectical and Historical Materialism (about 20 people) with two positive reviews. But in the discussion about the publication of the edited volume (“Laws and Categories of Materialistic Dialectics"), for which it was intended, the article became the subject of sharp criticism. The publication of the collection was postponed because of criticism against Zhelev's article, "which is not supported by a Marxist-Leninist view".

In response, Zhelev wrote to the First Secretary of the Central Committee of the Bulgarian Communist Party, Todor Zhivkov, and to the President of the Bulgarian Academy of Sciences, Academician L. Krastanov, on 27 April 1964. In his letter he asked "for your intervention to stop the attempt to deal with my article. I'm about to defend my dissertation and this article is a part of it." One month later, he received a response to his appeal by academician Todor Pavlov, honorary chairman of the Bulgarian Academy of Sciences, Director of the Institute of Philosophy, and long-time member of the Presidium of the National Assembly. Pavlov qualified Zhelev's appeal as "an inexcusable misleading of the First Secretary of the Party." He called Zhelev's theses "a retreat from dialectical materialism to Hegel's idealistic system" and ended by urging the PhD student "not to use in future such diversions and not to abuse the time, trust and goodwill of the First Secretary of our Party."

Zhelyu Zhelev's article was not published. On the contrary, this episode became the starting point of near-constant surveillance and periodic repression of Zhelev by the government and the State Security. He was not permitted to defend his dissertation, was expelled from the Party and with his wife was forced to leave Sofia (until 1972).

The documents which make up this featured item show the workings of an independent mind and how an oppressive state responded, as well as demonstrating the means which the government used to silence Zhelev (though unsuccessfully).