Leahu, Gheorghe. The Văcăreşti Monastery before the Storm, 1976. Watercolour 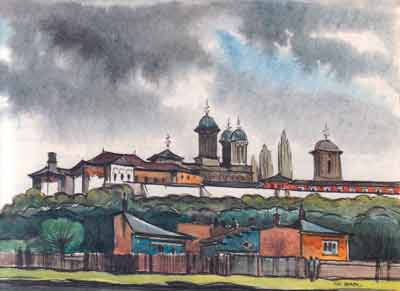 Given the severe constraints that the political authorities imposed on the activity of architects in the communist period, for Gheorghe Leahu watercolours became a form of escape. According to his testimony, Leahu was attracted by “architectural watercolour” painting because this activity allowed him to choose both the topics and his approach to them, thus offering him a creative freedom which was not possible in his professional activity. Being passionate about the architectural heritage of Bucharest, he chose to paint mainly picturesque landscapes in the old centre of the Romanian capital, and in other cities in Romania as well. He believed that painting “architectural watercolours” was also a way of leaving behind a testimony to the urban heritage which was in danger during those years. Because of Ceauşescu’s megalomaniac ambitions of reshaping the Romanian capital according to his vision of what a socialist city should look like, entire areas of the city were demolished during the 1980s.
Several of Leahu’s watercolours depict the Văcăreşti Monastery, one of the most important historic monuments in Bucharest, demolished in 1986. One of these watercolours, painted in 1976, is entitled “The Văcăreşti Monastery before the Storm.” The painting presents a panoramic view of the monastery complex built at the beginning of the eighteenth century. The title given by the painter to this watercolour contains an unintentional allusion to the monument’s tragic destiny. As head of the Bucharest Project Institute, a state company in charge of architectural projects in the Romanian capital, Leahu was appointed in 1984 to coordinate a team of architects in designing the new Bucharest court of law, which Ceauşescu wanted to build on the site of the Văcăreşti Monastery. Together with his team, he supplied the authority with twelve different plans for the future building which preserved most of the monastery complex. Their efforts were unsuccessful because in 1986 the authorities decided to demolish the entire monument. Thus, the watercolour became a source of information about one of the most valuable historical monuments destroyed by the urban policies of Ceauşescu’s regime. It was reproduced in some of the architect’s albums and books. One of these books, published in 1997, was dedicated to the demolition of the monument: Distrugerea Mănăstirii Văcăreşti (The Destruction of the Văcăreşti Monastery).

Panaitescu, Alexandru. 2012. De la Casa Scânteii la Casa Poporului. Patru decenii de arhitectură în Bucureşti 1945–1989 (From the House of the Spark to the House of the People: four decades of architecture in the city of Bucharest. 1945–1989). Bucharest: Simetria.