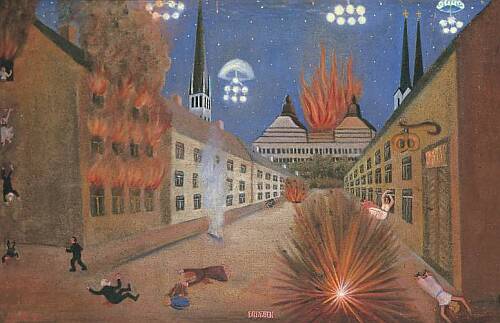 A painting by Paul Kondas called ‘Drezden’. It was painted presumably in 1960. According to the name, one might think that it depicts the bombing of Dresden by the Allies in 1945. In fact, it depicts the bombing of Tallinn by the Red Army on 9 March 1944. The Estonia Theatre, the Charles Church, and St Olaf's Church, in Tallinn, are all recognisable. Kondas painted on one of the light rockets the exact date of the event: 9 March 1944. The actual meaning and essence of Kondas' historical paintings (as he called them) was known only to a narrow trusted circle. These paintings were not known by the public. Mari Vallikivi noticed the exact date of the bombing on that painting only recently. Since Paul Kondas had no contacts with political dissidents, they were not aware of his work. The retired and eccentric schoolteacher was also not interesting to the authorities; besides, he was very careful, and was always ready to propose a completely different explanation to his paintings.

Today, we could say that people who lived under the Soviet regime or are familiar with the period would easily understand the painting. For those from outside the former Soviet Union, and also for the younger generation in Estonia who did not live in Soviet times, there is a greater need to explain the painting, because it is hard to understand why it was impossible to talk about things which were known to everyone. Mari Vallikivi stated that she does not always explain the political message of the painting to children.

The painting is probably widely used, but unfortunately the Kondas Centre does not have control over the usage of Kondas' paintings.

From the inception of the painting, it belonged, like the other paintings, to Kondas himself, until 1985 when he died. In 1986, the Museum of Viljandi bought it.