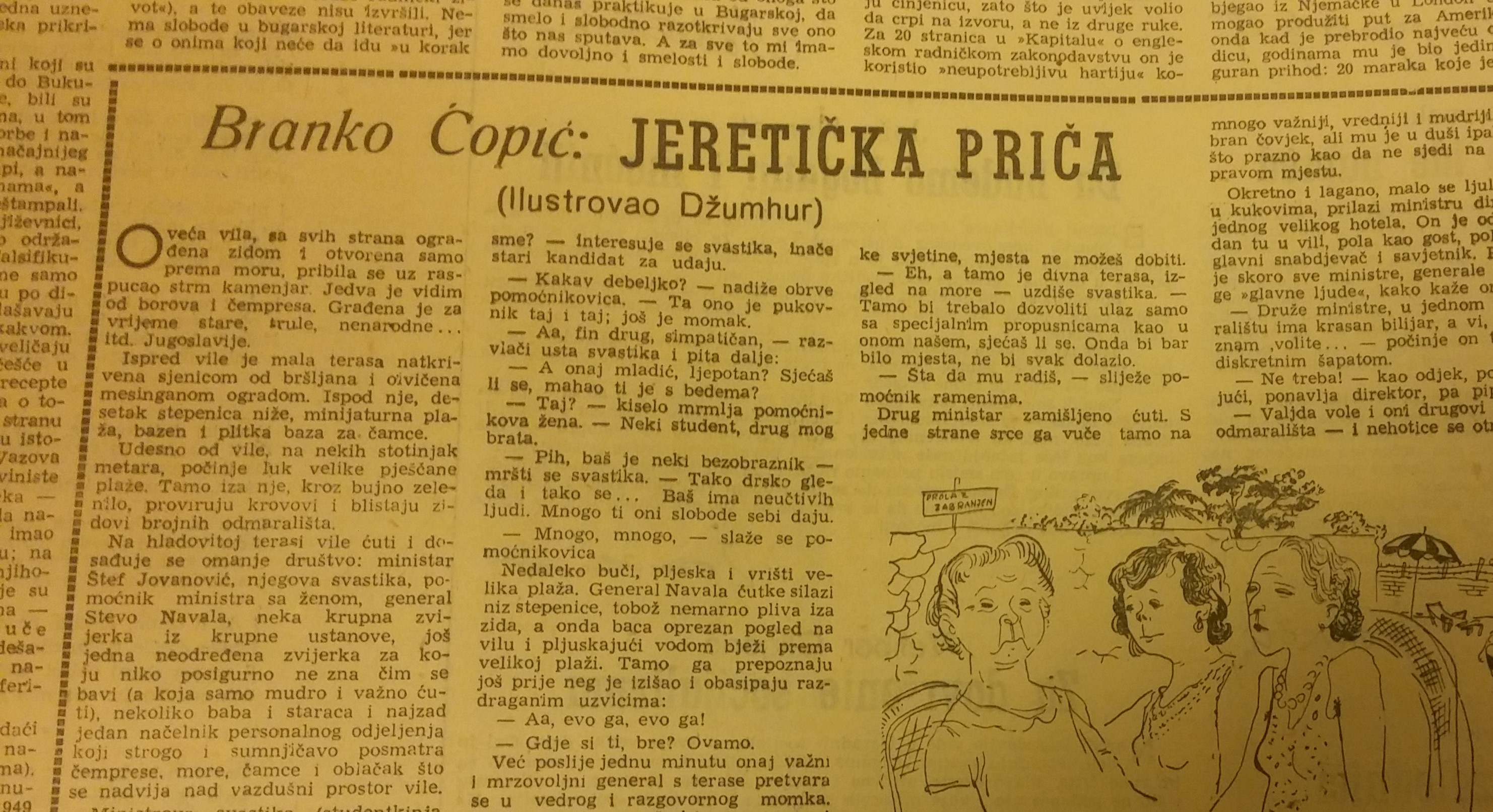 On 22 August 1950, ‘Književne novine’ published a story by Yugoslav writer Branko Ćopić, entitled ‘Jeretičke priče’ [Heretical Tales]. As the title alone suggests, the heresy was to touch on the communist model of government, even through satire. Ćopić targeted his criticism at privileges and the Soviet model of society, which although publicly renounced by the Yugoslav party two years previously, he continued to observe in Yugoslav practice. In the story, which traces a summer day in the life of the privileged ruling class, one criticism follows on the heels of the other: a girl student (a minister’s sister-in-law) drives to the faculty by car, while the deputy minister fantasizes about how marriage could land him a minister’s post and later the job of prime minister. Alongside all of this, the appearance of other figures in the story was also problematic, such as a general and an important personality of whom little is known ‘because he wisely and importantly keeps his silence’, as well as others (R. Petković, 2000, Sudanije Branku Ćopiću [The Show Trial on Branko Ćopić], p. 12–13).

Such a portrayal of Yugoslav society was sufficient to provoke a scandal. Immediately after its publication, a smear campaign was unleashed against Ćopić. The famous writer Skender Kulenović, a good friend of Ćopić’s, accused him of ‘abusing free expression’ in the very next issue of ‘Književne novine’. Others alleged that he was a ‘bourgeois critic’ and was discrediting ‘the tendency of development of our socialist society’ (R. Petković, 2000, p. 20). Thus a wave of criticism was released, culminating in a public declaration by Tito – uncharacteristic for all later cases of the repression of artistic creation in Yugoslavia. At the Third Congress of the Women’s Anti-fascist Front on 29 October 1950, he declared, ‘And what does it mean, when people from a minister, a general and a deputy minister to a shock worker are put into a satire, when it, so to speak, encompasses our whole state leadership and economy. He has taken the whole of society and depicted it from top to bottom as negative (…). We will not permit such a satire and leave it without response. He need not be afraid that we will arrest him for what he has attempted to do. No, we must publicly answer and say once and for all that hostile satire that intends to shatter unity cannot be tolerated among us’ (R. Petković, 2000, p. 23).

Ćopić’s literary legacy, which is kept at SANU, includes the Pismo Veljku [Letter to Veljko] in which Ćopić writes about this case. While he acknowledges that he may have exaggerated in some places, since he wrote the story in a hurry, he considers his course as ‘honourable’ and ‘worthy of a true writer’, and is ‘not ashamed of having taken the path of satire’ (R. Petković, 2000, p. 28). According to a leading Serbian historian, ‘This whole case is significant for the researcher. It illustrates the contradictory nature of the Yugoslav regime with regard to the issue of repression and civil freedom. The existence of informers and their everyday activity is in itself a sign of repression. But on the other hand, the non-existence of serious punishment is an indication of liberalization’ (P. Marković, 1996, Beograd između istoka i zapada [Belgrade between East and West] 1948–1965, p. 178).

Precisely Ćopić is a good example of the dual nature of the Yugoslav system. Thanks to his undoubted revolutionary merit, he succeeded in avoiding more serious repercussions in relation to his personal integrity and writing, though he continued to critically view Yugoslav society through the medium of satire in the following decades.