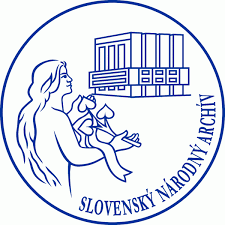 The Slovak National Archive (SNA) is the largest and most important public archive in the Slovak Republic. Because Slovakia had no status as an independent state, no central archive existed until the twentieth century. A Provincial Archive was first created in 1928, when a regional institution was established in Slovakia. In 1939 its agenda was taken over by the Ministry of the Interior, renamed the Archives of the Ministry of the Interior, and housed in the county building (Župný dom) in Bratislava. The Archive of the Ministry of the Interior co-operated with the central archives in Vienna and Budapest and prepared documents for the establishment of a central state archive in Slovakia.

SNA holdings are divided into two departments: older funds, and new funds. The department of older funds holds historical documents from the twelfth to twentieth centuries in several languages, and consists of 2,624 linear meters of records. It includes 383 archive collections of church institutions, noble families, and their feudal lordship and inferior nobility. There are also personal archive collections (126 personal funds), created by the activities of important Slovak personalities from political, economic, cultural and other spheres of public life. In addition to the classical archive funds, the department also includes 56 archive collections created by institutions and individuals.

The department of new funds was established on 1 July 1993. At present, this department administers 351 archive collections, which were collected by the highest authorities of state power and administration from the period of the First Czechoslovak Republic, The Slovak Republic (1939–1945), and post-war Czechoslovakia; these collections cover the period from 1918 until 1968 and contain 23 818 linear meters of documents.
In the period after 1945, the basic archive funds include documents from The Slovak National Council, the Board of Commissioners and other central offices in Slovakia. At present, less than half of the material is available for research purposes from the total of archive documents managed by the department.

A Guide to Archival Collections is available to the researcher.