Exhibition: “Securitatea – Instrument of the Dictatorship” 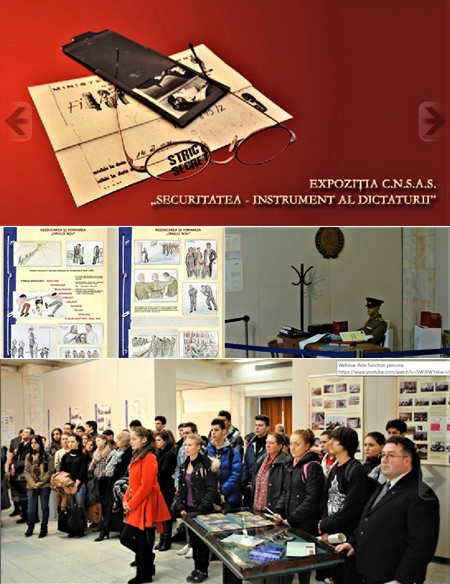 This exposition represents an introduction to the history of the Securitate during its more than four decades of existence in communist Romania. The Securitate was a key instrument for maintaining the Communist Party in control by annihilating any type of existing or potential opposition. More generally, the exhibition makes possible a better understanding of the violent essence of the Soviet-type regime which ruled in Romania from March 1945 to December 1989. The exhibition is organised on two levels. On the one hand, it disseminates previously secret documents regarding the main methods of repression and surveillance which the Securitate used extensively against arbitrarily defined enemies. It illustrates inhumane treatment during arrest, interrogation, and imprisonment. At the same time, it details the organisation of routine surveillance of a targeted person or group, including censorship of correspondence, taping of phone calls, street shadowing, and insertion of informers into the immediate entourage of the victim. In each county where the exhibition has travelled, these aspects have been illustrated with examples taken from the files produced by the local branch of the Securitate. Many of these files are now in the CNSAS Online Collection, included in the section România supravegheată (Romania under surveillance). On the other hand, the exhibition presents the perspective of those who had to suffer because of the secret police, of those who were imprisoned, harassed or put under surveillance. These traumatic experiences have been narrated by their protagonists in the setting of the Constantin Ticu Dumitrescu Centre of Oral History at CNSAS. On the basis of these testimonies, CNSAS has produced a documentary entitled Supravegheat de Securitate în anii 1970 and 1980 (Put under surveillance by the Securitate in the 1970s and the 1980s), directed by Nicolae Mărgineanu. This documentary circulated together with the travelling exhibition. Between 2007 and 2018, this exhibition was presented in the following cities: Bucharest, Alba-Iulia, Constanța, Iași, Oradea, Piatra-Neamț, Sibiu, Suceava, and Zalău. Parts of the exhibition travelled to Warsaw and Budapest.