Letter from Virgil Ierunca to Sanda Budiș, in Romanian, 25 February 1985 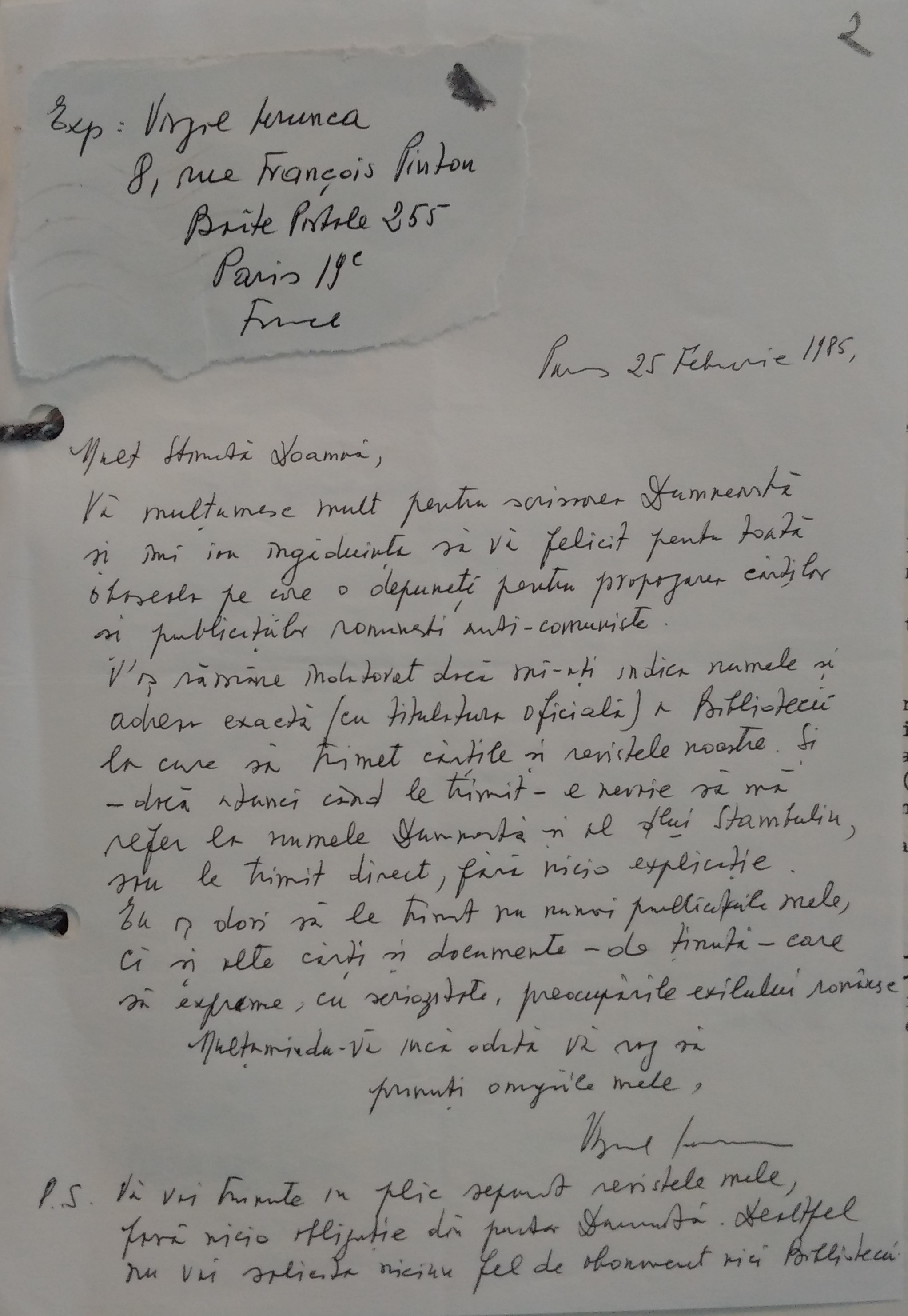 This letter is an important document for the history of the post-war Romanian exile community because it is proof of the activity of fighting communist propaganda outside the country, as well as of the integration of Romanian culture into Western culture. Such activity was also carried out by Sanda Budiș, an exile community personality, who emigrated to Switzerland in 1973. One of her actions, alongside another representative of the Romanian exile community in Switzerland, the lawyer Dumitru Stambuliu, consisted in supplying the Swiss Library for Eastern Europe in Bern with publications of the Romanian exile community. The starting point of Sanda Budiș’s project was a book donation from Romania, which the Romanian ambassador to Switzerland made to the Cantonal and University Library of Lausanne in 1984. This donation took place during a festivity advertised in the local press. In response, Sanda Budiș took the initiative to donate publications of the Romanian exile community from her personal library to this library, but her donation was denied "for political reasons." Consequently, she addressed the leadership of another institution – the Swiss Library for Eastern Europe in Bern – which served at the time as a documentary fonds for the Swiss Eastern Institute (Institut suisse de recherche sur les pays de l'Est–ISE/Schweizerische Ostinstitut–SOI), an institute that carried out research on communist countries. At the Institute, both the management and the members were Swiss personalities with authority in their field of expertise. The management of this library accepted her donation “with great satisfaction, especially as it is literally flooded by propaganda publications sent free and regularly by the various propaganda officers of the Ceaușescu regime.” In order to counteract the propaganda of the Romanian communist authorities, Sanda Budiș continued her efforts by sending letters to the management of important and representative publications of the Romanian exile community. Among the recipients of such letters was Virgil Ierunca, who accepted her invitation and sent to the library not only newspapers and magazines of the exile community, but also books published by Romanians abroad. Ierunca also responded to Sanda Budiș in a letter in which he congratulated and thanked her for the action she had initiated. The original handwritten letter is to be found today in the Sanda Budiş Collection at IICCMER.