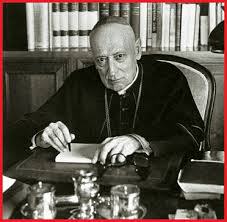 Cardinal József Mindszenty (1892–1975) was a Roman Catholic clergyman who became Archbishop of Esztergom immediately following the Second World War. He was a conservative clergyman and uncompromising opponent of both fascism and communism in Hungary for more than five decades. Politically active from the time of his ordination as a priest in 1915, Mindszenty was arrested as an enemy of totalitarian governments twice—at the time of the Hungarian Soviet Republic in 1919 and again during the period of pro-Nazi Arrow Cross rule in 1944. In 1945, he was appointed Primate of Hungary and Archbishop of Esztergom and in 1946 became a cardinal. Mindszenty’s refusal to permit the Roman Catholic schools of Hungary to be secularized prompted the communist government to arrest and torture him in 1948 and to condemn him to life in prison in 1949 on charges of treason. Minszenty was set free during the 1956 Hungarian Revolution and, when the communist government supported by a massive Soviet military invasion regained control of Hungary, he sought asylum at the U.S. embassy in Budapest. Mindszenty spent 15 years in voluntary confinement at the embassy, rejecting requests from the Vatican to leave Hungary and relenting only in 1971 at the entreaty of U.S. president Richard M. Nixon. Initially as a guest of the Vatican then while living in Vienna, he criticized the pope’s attempts to deal with Hungary’s communist régime and in 1974 was finally compelled to retire from his posts as archbishop and primate. During his last few years in the West, Mindszenty went on worldwide pastoral tours, visited Hungarian émigré communities and provided support for their churches as well as for the Hungarian Scout Association in Exteris through a number of significant donations. Mindszenety was originally buried in Austria, but in 1991, following the fall of Hungary’s communist government, he was reburied at Esztergom Basilica in northern Hungary.