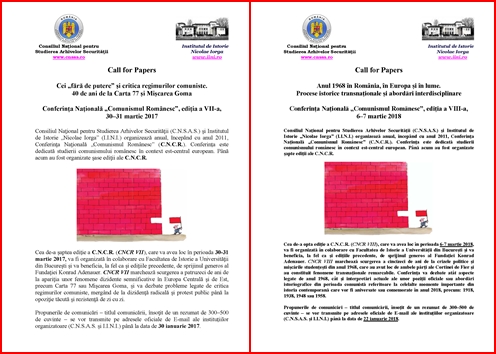 Comunismul românesc (Romanian Communism) is a series of national conferences organised annually in Bucharest each March since 2011. The conference series is a joint project of the National Council for the Study of the Securitate Archive (CNSAS) and the Nicolae Iorga History Institute of the Romanian Academy, to which the Faculty of History at the University of Bucharest has also contributed since 2016. Its main purpose is to bring together scholars interested in the study of the communist regime in Romania in a regional and wider European context. The initiation of the conference series led to a closer collaboration between CNSAS and the Nicolae Iorga History Institute, which subsequently engaged in the project of digitising the publications related to the history of the Romanian Communist Party that are now part of the Online Collection at CNSAS. Over the years, participants at the conference have approached various aspects of the history of communism in Romania and East-Central Europe, ranging from repression, opposition, and propaganda to everyday life, memory, and post-communist nostalgia. Many of the papers, especially those dealing with repression and the role played by the Securitate, have been based on documents in the CNSAS Online Collection. More importantly, during this series of conferences, participants have made valuable suggestions regarding the types of documents that should be included in the online collection.