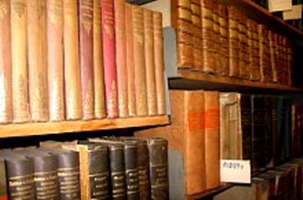 Ever since the 1990s, Adrian Marino had intended to donate his library and personal archive to a public institution to preserve it and make it accessible to the general public. According to Florina Ilis, the author considered a possible donation to the Library of the Romanian Academy as well as to the Museum of Romanian Literature in Bucharest. His decision to make the donation to the Central University Library of Cluj-Napoca (BCU Cluj-Napoca) was influenced by the manager of the institution at that time, the historian Prof. Doru Radosav. He convinced Marino that the institution he was running was the most suitable to preserve and valorise his collection. On 31 March 1994, Adrian Marino signed before a notary public the donation deed through which his personal archive and library were to be transferred gradually to the custody of BCU Cluj-Napoca. In the second part of the 1990s, most of the files in his personal archive were delivered to BCU Cluj, and after his death in March 2005, his library was also transferred to this institution. Florina Ilis, employee of BCU Cluj-Napoca, was in charge of archiving the Marino Collection, a process which took place under the author’s guidance. The room in which the collection was deposited is intended especially for doctoral students and young researcher. Given its size and cultural value, we consider the Marino Collection to be one of the most important private collections received by BCU Cluj-Napoca.