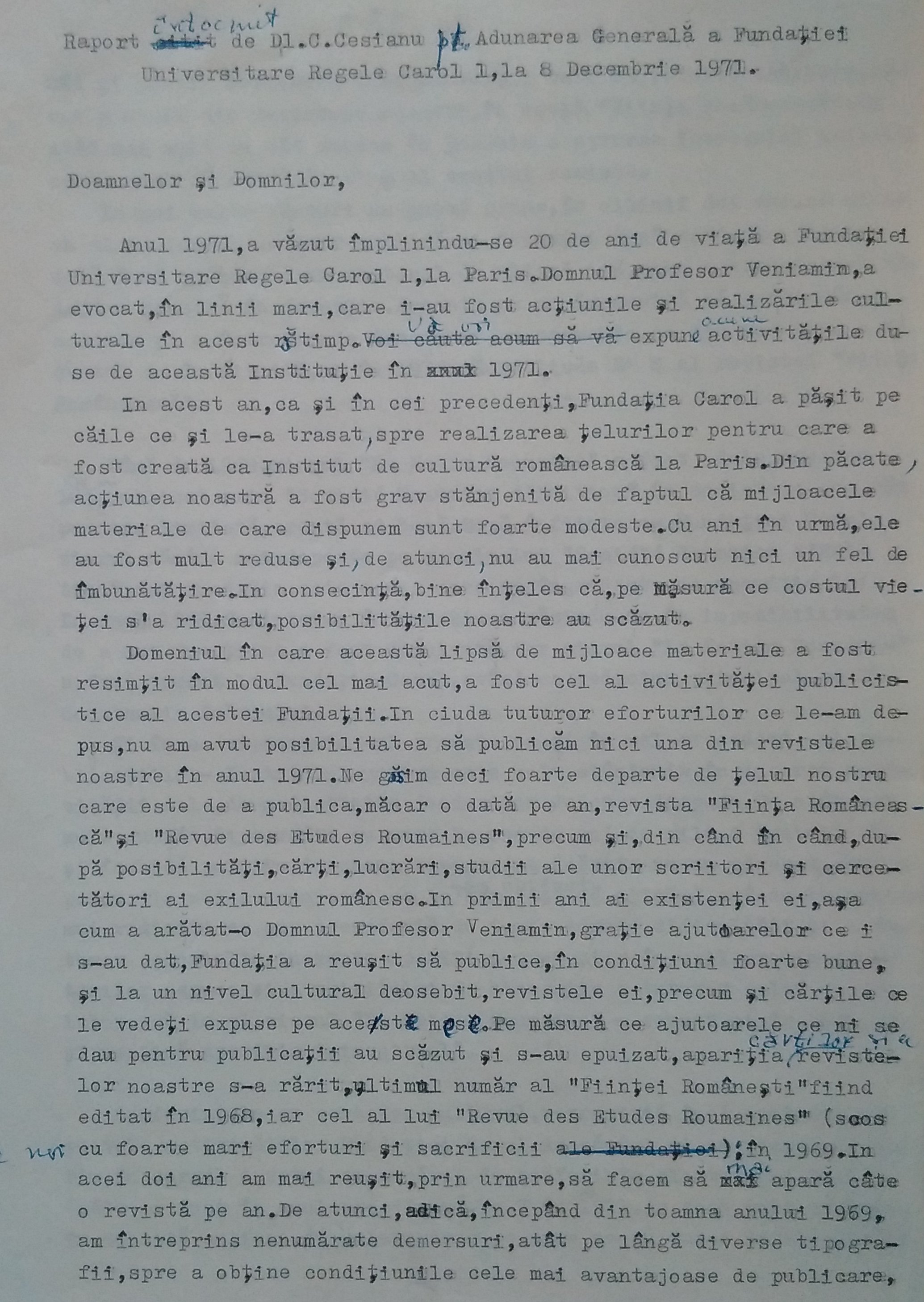 This document reflects the manner of organisation and activity of the Romanian postwar exile community, as well as a series of major problems that it encountered: the lack of material means and of the unity of Romanians. The Romanian exile community, although a form of opposition of Romanians from several historical periods, reached a significant dimension during the communist regime. The postwar Romanian exile community manifested itself over an expanded geographical area, spread across several continents: Europe, North America, South America, Australia, and Africa. There were, however, a number of states where the Romanian exile community was particularly active: France, the USA, the UK, West Germany, Spain, and Canada. Determined by the domestic political context and influenced by shifts on the international political scene, the Romanian exile after the Second World War must be understood as a reaction to the establishment and domination of the communist regime in Romania and as a form of opposition to it. Romanians abroad tried to organise themselves by setting up foundations, associations, institutions, institutes, and publications with the purpose of: representing the Romanian nation and defending its interests until its liberation; carrying out actions that would lead to the restoration of the democratic system in Romania; coordinating the activity of Romanians outside the country for the fulfilment of this common cause; establishing links with Western governments and international organisations; representing the exile community and solving its problems; and collaborating in joint activities with representatives of the other "captive nations" in Central and Eastern Europe.

The report in question, which amounts to five pages, presents the situation of one of the most important cultural organisations of the exile community, the Carol I Royal University Foundation. A university level institution, the Carol I Royal University Foundation (1950–1974) was initially founded in Paris on 3 May 1881 by King Carol I, but was abolished by the communist regime in Bucharest. Later, on December 8, 1950, out of a desire to continue the old royal family tradition, it was re-established by King Michael I in exile, with the support of the Romanian National Committee, which was in the view of the founders the government of Romanians in exile. The Foundation began to function effectively on 1 January 1951. The purpose of the Foundation was: to present the values ​​of Romanian culture to the West; to affirm and develop the traditional ties between French and Romanian cultures; to establish and maintain relations with cultural and educational institutions and with the French administrative authorities; to ensure a Romanian presence in international cultural forums and events; to safeguard the national cultural heritage; to study the cultural and technical problems that Romania would face after liberation from the communist regime; to support and guide Romanian students in exile; to encourage scholarly research; to build up a library at the headquarters of the Foundation, transforming it into the House of Romanian Culture abroad. Every year, the Foundation's leaders drew up an activity report. Such a document can be found in the collection of Sanda Stolojan, who was involved in the Foundation's activities and published poetry and prose in its two literary publications: Ființa Românească (Romanian being) and Revue des Etudes Roumaines. A copy of this document is in Sanda Stolojan's private archive due to the fact that she was a close friend of the person who wrote the material, Constantin Cesianu, and was directly involved in the Foundation's actions. Regarding the personality of Constantin Cesianu (1886–1983), he was a political detainee in communist Romania between 1956 and 1963. A few years after his release, he emigrated to France, where he published the book Salvat din infern (Saved from the inferno), in which he reported his experience as a political prisoner in communist Romania. The volume originally appeared in French. It was translated into Romanian and published in Romania in 1992, and is an indispensable part of any specialised bibliography on the subject. In Paris, he actively participated in the activities of Romanians in exile for the promotion of Western media coverage of the repressive and aberrant policies of the communist regime in Romania.

The report that Constantin Cesianu wrote in 1971 draws attention to the situation of the Foundation in that year, when its annual activity balance was not a positive one. The explanation was the lack of the material means to achieve its goals. In fact, all organisations of the exile community were confronted with this problem. On a different line of thought, beyond the Foundation's poor financial situation, the report presented some of the activities the Foundation carried out in 1971: cultural conferences and the celebration of Romania's historic days (1 December – Great Union Day, 24 January – Little Union Day, 10 May – Independence Day). Furthermore, the paper presented the situation of the Foundation’s library and the profile of the researchers who had come there for documentation. Finally, the unity of Romanians abroad was called for – the supreme desideratum of all the organisations of the exile community, though it never materialised between 1948 and 1989.