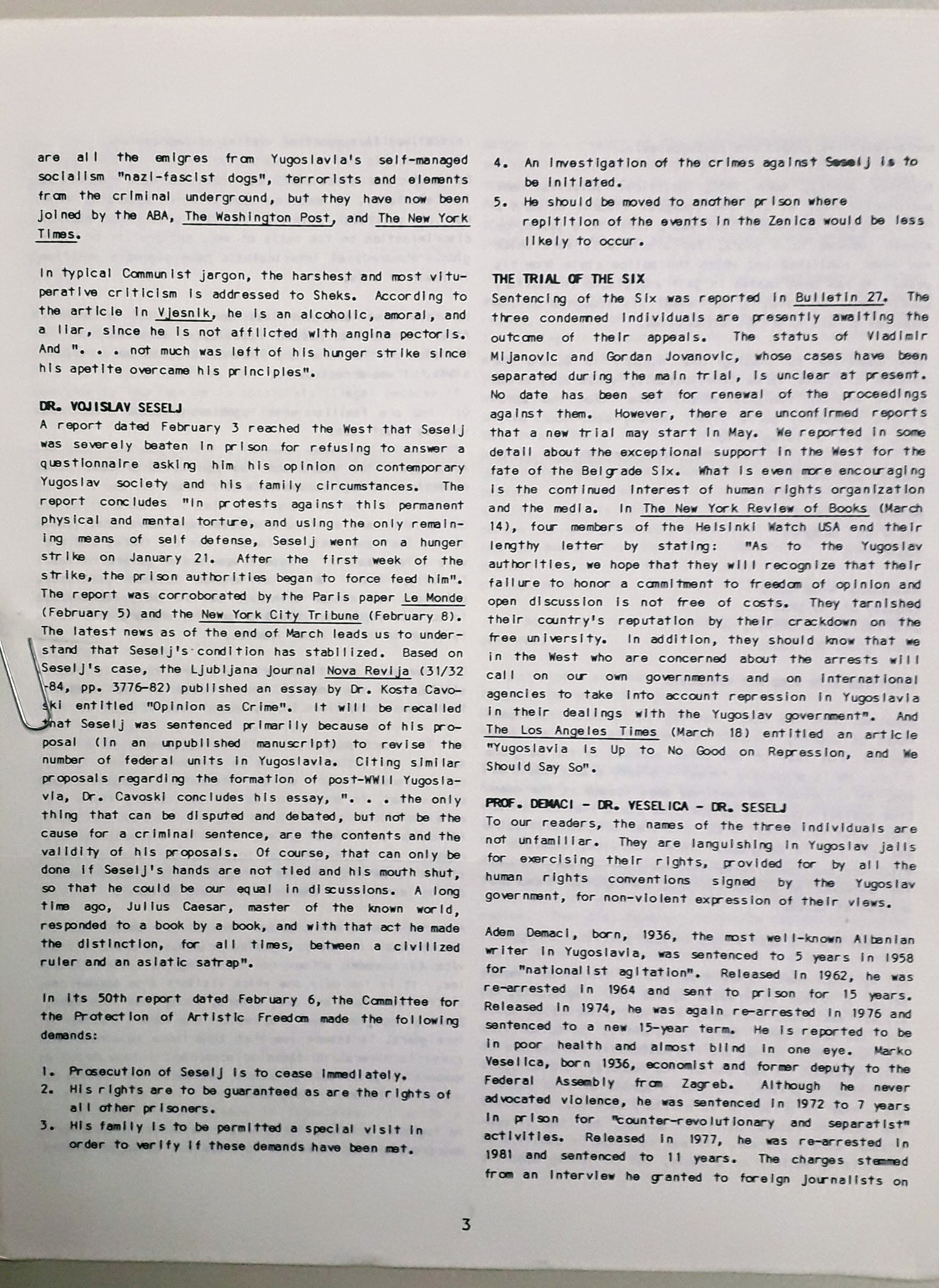 The featured item of this collection is the third page of issue no. 28, published in 1985. It consists of two brief reports on the cases of the Yugoslav dissident Vojislav Šešelj and members of the “Free University“ (known as the Belgrade Six).

The first text reminds of the prison mistreatment of Šešelj, sentenced in 1984 to eight years’ imprisonment for “counterrevolutionary activity” (Dragović-Soso 2002, 58). For years he was known for challenging local Bosnian authorities and intellectuals. Consequently, he was dismissed from the University of Sarajevo where he worked as an assistant and was expelled from the League of Communists of Yugoslavia. However, Šešelj was sentenced primarily due to “his proposal (in an unpublished manuscript) to revise the number of federal units in Yugoslavia” (C.A.D.D.Y. Bulletin no. 28 1985, 3). Here Šešelj suggested that Serbia be unified with Montenegro and that Bosnia and Herzegovina be partitioned between Serbia and Croatia, while denying Muslim and Montenegrin nationhood (Dragović-Soso 2002, 57).

The featured item communicates arguments which defend Šešelj’s right to freedom of expression. C.A.D.D.Y. argued that Šešelj’s proposal could be subject to debate; however, it is not grounds for criminal prosecution.

The text concludes with proposals of the Committee for Protection of Artistic Freedom, calling for an end to Šešelj’s persecution and to respect his human rights as a prisoner.

The second text discussed the previous C.A.D.D.Y. Bulletin issue (no. 27), which reported on the sentences of the Belgrade Six. The text reported that Western countries are aware of the crackdown on the “Free University” and other arrests and sought to communicate to the Yugoslav government that repression of freedom of opinion and expression is “not free of costs” (C.A.D.D.Y. Bulletin no. 28 1985, 3).

The case of the Belgrade Six took place in 1984 when twenty-eight members of the “Free University” were arrested while attending a presentation given by “Yugoslav dissident no.1” Milovan Đilas. They were interrogated and some were subjected to physical abuse resulting in one suicide attempt and one case of death under mysterious circumstances. Afterwards six members of the “Free University” were indicated in court (Vladimir Mijanović, Miodrag Milić, Dragomir Olujić, Pavluško Imširović, Milan Nikolić, and Gordan Jovanović).

The two cases of Šešelj and the Belgrade Six, both taking place in 1984, were crucial to the radicalisation of the intellectual opposition in Yugoslavia. The Belgrade intelligentsia, now accompanied by colleagues in Zagreb and Ljubljana, undertook a series of protest actions such as calling for high officials to resign from their positions, writing petitions, forming new dissident committees, with the Committee for the Defence of Freedom of Thought and Expression being the most important. The committee went as far as opposing the entire legitimacy of the Yugoslav regime and demanding the abolition of the one-party system, free elections, a free press, and an independent judiciary (Dragović-Soso 2002, 60).