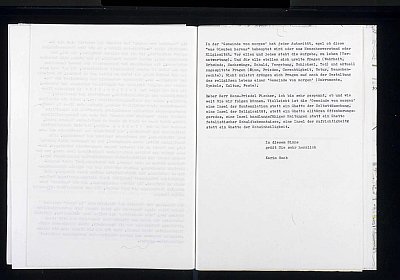 In Leipzig between 1985 and 1988, Karim Saab, Angelika Klüssendorf, and Gert Neumann issued ANSCHLAG (known as “Machwerk” by the Stasi). The publication was inspired by the production of UND and its producers aimed at bringing arts and opposition together in Leipzig as well. The prints were typed (a volume included 40 pieces; considering that printing over 100 copies required permission from the authorities), altogether including nineteen issues and two special issues. In addition to its literary and artistic contributions, the publication also included political statements such as of Vaclav Havel. Often Saab carried ANSCHLAG to Berlin in the Umwelt-Bibliothek. Among the themes it addressed were escape, eastern European political issues such as those in Poland and Czechoslovakia, and eastern European dissidents.