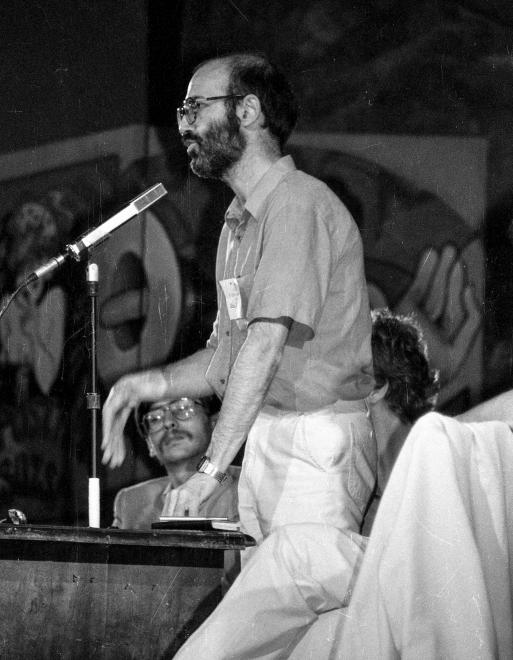 Philosopher János Kis (1943–) was a prominent member of the democratic opposition, founder of Beszélő (“Speaker”), and founding member and first chair of the Szabad Demokraták Szövetsége (SZDSZ) (“The Alliance of Free Democrats”).

He became familiar with the leftwing mindset and values in his family circle. His father was an antifascist resister and was killed during World War II. Other relatives of his became victims of the Holocaust. His mother worked as a party officer after the war, and numerous communist intellectuals had connections with his family. He studied in the famous Hungarian-Russian language Gorkij school, and he graduated from Eötvös Loránd University in 1967. He belonged to the youngest generation of the philosophical school related to György Lukács. He joined the state party in 1966. He criticized Marxism on scientific grounds, and because of this, he was banned from the party and was sacked from his workplace, the Philosophy Institute of Hungarian Academy of Sciences. He worked as a freelance translator.

In the late 1970s, he began to participate in the democratic opposition. He belonged to the inner circle of thinkers who were critical of the system, and he was regarded as a leading figure. He signed the Charta ’77 in 1977 and in 1979. Events in Poland shaped his thinking, and his knowledge of Polish made it easier for him to read the foreign samizdats. He held lectures at the Monday Free university in the 1980s, and he was one of the contributors to the István Bibó memorial book in 1981. In the same year, working together with others, he helped establish the most important samizdat journal, Beszélő (“Speaker”), and he became the editor-in-chief. He participated in the Monor Meeting.

It was understood among dissenters that János Kis and György Bence regularly worked at the library of the Academy of Science. The smoking room of the library was a special meeting point for people who belonged to the opposition. Kis and Bence were underground celebrities and symbols of meaningful, reflective opposition to the communist system, as philosopher Gáspás Miklós Tamás noted.

In 1988, Kis established the Szabad Kezdeményezések Hálózata (“Network of Free Initiatives”) and after the fall of the regime, he was active as a member of Szabad Demokraták Szövetsége (SZDSZ) (“The Alliance of Free Democrats”). Indeed, he was the leader of the party, though in 2002, he quit. He was employed at the Institute of Philosophy of the Hungarian Academy of Sciences between 1990 and 1998. He was active as a teacher and researcher in Hungary and abroad.