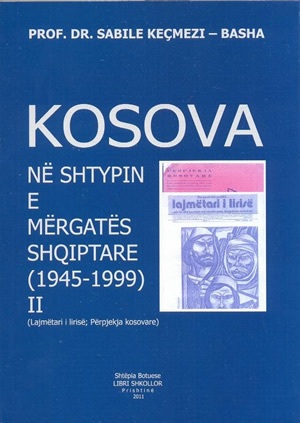 The publication contains excerpts of articles on illegal organizations which were illegally published and distributed. All materials were collected during interviews with political prisoners and illegal group activists.

The political events in Kosovo, particularly the demonstrations of 1981, drew attention from international and Yugoslav opinion makers. Demonstrations of 1981 brought about a new political spirit which encouraged the organized political unity of Albanians in Yugoslavia. In order to expand nationalist sentiment among the wider population, the groups found it necessary to organize propaganda.

During the 1980s, illegal Albanian press began to be distributed among the diaspora, playing an important role in the dissemination of their political agendas. The most popular magazines published in those years were Liria (Freedom), Bashkimi (Union), and Lajmetari i Lirise (The Messenger of Freedom), among others. The influence of these illegal publications was significant, and many Albanians during the 1970s and 1980s managed to read and further distribute these articles, which widely spread the idea of an independent republic and of the creation of a single ethnic (Albanian) state.

This press was devoted primarily to politically sensitive events. Lines such as 'the police forces of the Serbian bourgeoisie again covered our Kosovo with fire’, ‘the blood of our sons and daughters washed Kosovo's streets’, and ‘the path of resistance of the determined struggle is the only way [to] victory, the only way [to achieve] our rights....' were often present in these articles. These newspapers are considered to have provided a powerful weapon in what the Albanian community saw as their fight for freedom, liberation, and ethnic unity.