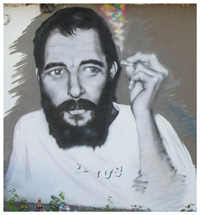 Imre Baász (1941-1991) was a Transylvanian Hungarian graphic artist. Baász was born in Arad on February 22, 1941 to a family of Jewish descent. In 1972, he graduated from the Department of Graphics at the Ion Andreescu Fine Arts University of Cluj as a student of graphic artist László Feszt. At the request of the Kriterion Publisher, he made illustrations for the Kalevala as his thesis work, for which he was awarded the second prize of the Graphic Art Salon of Bucharest. He moved to Sfântu Gheorghe (Sepsiszentgyörgy) in 1977 and began to be active as a kind of one-man institution. He organized workshops in his atelier to introduce local artists and art lovers to modern ideas. As an artist, he mainly thought about the survival of the Hungarian minority living in Transylvania. His art is draws on Expressionist traditions, and it is related to Conceptualism and the action art. In 1981, Baász organized the exhibition “Medium I.” for international contemporary works. In 1986, he initiated the exhibition “Bird Action,” and in 1987-1988 he organized the exhibition “Drawing-Space-Form.” In 1990, he launched the AnnArt performance-days, which he organized until his death. In 1990, he began serving as the scenographer of the Hungarian theater in Cluj (Kolozsvár). In 1990-1991, he taught as a member of the faculty at the Academy of Fine Arts in Bucharest. In 1991, he organized the “Medium II” exhibition.