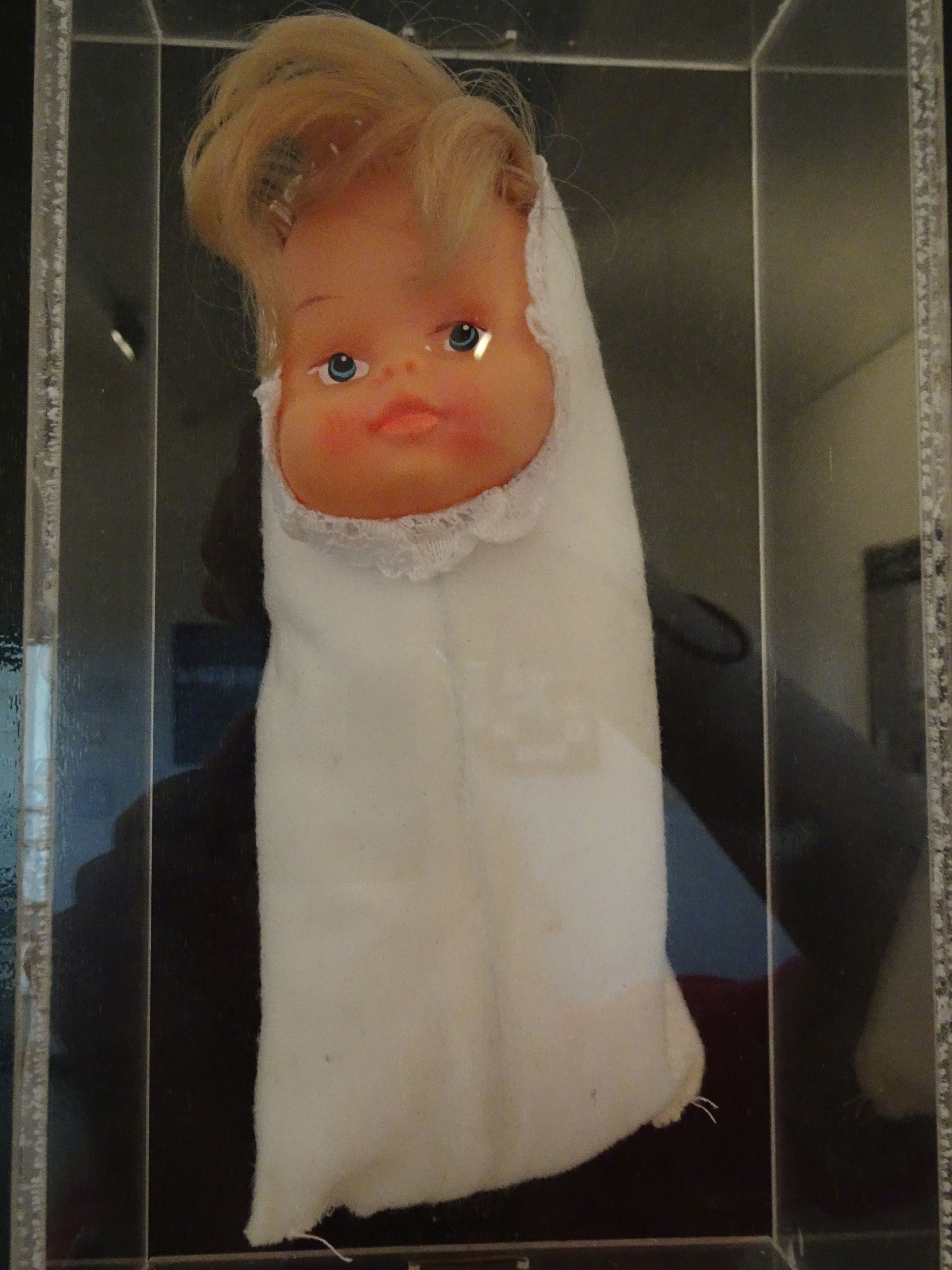 The doll was donated to the Sighet Memorial by Doina Cornea, together with other original objects, among them some samizdat materials, probably the only ones produced by Romanian dissidents. These are texts that Doina Cornea translated from French, multiplied with her typewriter using thin paper in order to be able to produce as many copies as possible at a time, and circulated among her students at Babeş-Bolyai University in Cluj. The doll has a special story, connected to the transmission of Doina Cornea’s dissident texts across the border. “The doll was donated in 2002; at the time, we were working to gather documentary material for the exhibition dedicated to dissidents and opponents of communism in this country. She gave us her letters, and she also gave us the doll in which some of the letters had been hidden. It was a doll from the 1980s and belonged to her granddaughter. Mrs Cornea put the letters in the doll, and when her daughter and her children crossed the border, nobody bothered to check the doll. It is a doll that was filled with texts,” explains Ioana Boca, the executive director of the Civic Academy Foundation.

The story of this remarkable doll is representative of a significant episode in the story of dissidence in Romania. According to Ariadna Juhas-Combes, Doina Cornea’s daughter, this doll carried the letter that Doina Cornea, together with other signatories, addressed to Pope John Paul II to attract his attention to the persecution directed at members of the Greek Catholic Church in Romania, which had been suppressed in 1948 by union with the Orthodox Church. “We listened to the letter broadcast by Radio Free Europe on 23 August [1988] here together, and we stayed as long as we could, until the start of school. I realised that nothing would happen as long as we were here, my husband, the children, and myself. And then we left, taking the letter for the Pope. We took it in a doll [laughs]. My little girl, who you’ve seen [laughs], was ten months old and she travelled with the doll containing the letter, in a car bed [laughs]” (Cornea 2009, 202).

The idea of using dolls to send these texts had been tested for the first time on the occasion of the sending to Radio Free Europe of the text of the so-called 23 August letter, which constituted the most extensive reform programme proposed by Doina Cornea. This open letter addressed to Nicolae Ceaușescu had been written in small letters on cigarette paper and sewn into the head of a homemade doll, together with a letter addressed to the conference organised by the Polish Solidarity movement in Cracow, to which Doina Cornea had been invited, though she was prevented by the communist authorities from taking part. The two letters arrived at the Radio Free Europe offices in Munich with the help of the Belgian journalist Josy Dubié; Doina Cornea had seen him by chance in the centre of Cluj in a car with a foreign number plate, and had quickly stopped him and asked him to take the doll with him, succeeding in being faster than those who were following her. It is interesting to add that, after finding out who Doina Cornea was from the Belgian Embassy in Bucharest, Dubié returned to Cluj, succeeded in his turn in tricking the Securitate agents who were following him too, and managed to enter the dissident’s house, which was guarded night and day, and to interview her. The result was the inclusion of this interview in the documentary, extremely critical of the Ceaușescu regime, which Dubié made as a result of his visit to Romania in 1988. Entitled The Red Disaster, this documentary was broadcast starting in December 1988 by almost all the national TV stations in Western Europe and even on Hungarian TV. As a result, the communist regime in Bucharest became the target of criticism on the part of all the Western governments and of the European institutions. At the same time, the Opération Villages Roumaines initiative came into being at the level of civil society in several Western countries; it was an extensive network developed with the aim of facilitating the creation of twinnings between localities in Romania and on the other side of the Iron Curtain to prevent the destruction of the architectural heritage due to the demolitions planned as part of the urban and rural systematisation plan of the Ceaușescu regime (C. Petrescu 2013, 311–317).

The doll that is preserved in the Museum is approximately 10 cm in height, and is currently exhibited in Room 77 of the Sighet Memorial, the room dedicated to “Opponents and Dissidents of the 1970s and 1980s.” The same room houses manuscripts and objects of value as museum pieces that illustrate the ephemeral collective protests of the Goma Movement in 1977 and the Free Trade Union of Romanian Workers in 1979, together with the cases of solitary dissidents and critical intellectuals in the 1980s, such as Radu Filipescu, Vasile Paraschiv, and Gheorghe Ursu, and of the journalists and printers of the daily newspaper România Liberă (Free Romania), Mihai Băcanu, Mihai Creangă, Anton Uncu, and Alexandru Chivoiu, who managed to publish several clandestine editions before being arrested in 1989. In short, according to the Museum guide, “The panels in this room present exceptional cases in a country that had been reduced to silence and submission.”