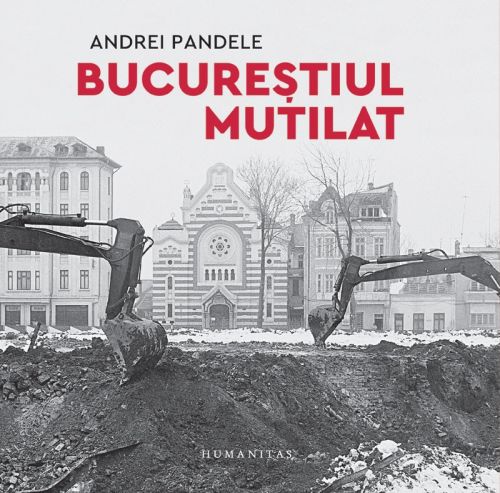 The book-album Bucureștiul mutilat (Mutilated Bucharest, 2018) offers an anthology of over 150 photographs taken by Andrei Pandele and several dozen others by some of his friends and colleagues (Dan Vartanian, Dan Dinescu, Sorin Vasilescu, Peter Derer, Şerban Lăcriţeanu, Andrei Bîrsan, Nic Hanu, and Radu Ştefănescu). Through a photographic discourse of great visual and emotional impact, the book presents the most important landmarks in the terrible operation of mutilation and uglification of the capital in the last years of Romanian communism. It also draws attention, through some dozens of photographs, to some important aspects of everyday life during communism in the period 1975–1989, especially in Bucharest. “On the orders of a primitive and megalomaniac tyrant, more was demolished in peace time than that was destroyed by two world wars and two major earthquakes (those of 1940 and 1977),” states Andrei Pandele. Bucureștiul mutilat tells the story of many of the areas demolished according to the directions of the Ceaușescu couple, and is in a way an act of justice on the level of history inasmuch as the photographs in the book represent part of the memory lost  and the beauty destroyed, savagely, in Bucharest by communism. In short, it is a photographic commemoration of the destructions ordered by the officials of the communist regime in the 1980s, as a consequence of which a large part of the centre of the capital was truly mutilated. In basic, concrete terms: 5.86 km2 of the historic centre demolished; 1.66 km2 turned to waste ground overgrown with weeds; approximately 20,000 properties destroyed; over 60,000 families forced to move; 19 streets blocked or no longer existing at all; Orthodox churches, monasteries, synagogues, and other monuments wiped from the face of the earth; eight churches translated and hidden among apartment blocks. The book Bucureștiul mutilat was published, to a high graphic standard, at the most prestigious publishing house in Romania, Humanitas, and enjoyed considerable public and media exposure. The principal moment of public debate regarding the volume was moderated by Cristian Pătrășconiu, a researcher in the COURAGE H2020 project.