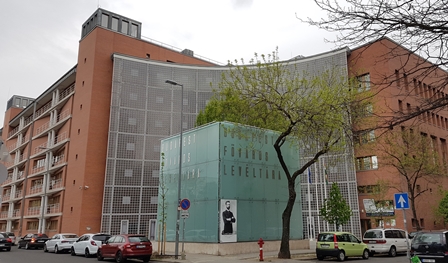 The Budapest City Archives (as Capital Archives) holds the second largest archival collection in Hungary. After 1873, the year of in which Buda and Pest were unified to form the city of Budapest, the archival documents were housed in the old city hall of Pest and the unused basements in the city hall of Buda, and then, as of 1887, in the New City Hall too. In 1998, Teve Street, located in the 13th district, was chosen as a site for the Archives. The new establishment was opened in 2004.
The Budapest City Archives, as a general and regional archive, keeps 35,000 linear meters of documents in the new building, which has 23,440 m2 of usable space. The documents of contemporary town self-governments and records of the town representative bodies of the socialist period are valuable sources. The collection of the People's Tribunal (1945-1949) and the documents of national and political certification committees are also rich sources for scholars. The Archive also contains many sources on economics. The documents of different associations (Duna Circle, National Pantheon Foundation etc.) also represent important collections.