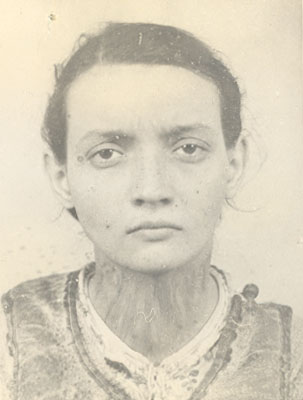 Among the first few hundred recordings in the oral history archive of the Sighet Memorial, Aristina Săileanu-Pop’s testimony stands out due to the fact that it tells of the personal experience of one of the most striking representatives of the organised resistance in the mountains of Maramures after the seizure of power by the communist regime. The recording of this testimony is number 254 in the archive. The audio document comprises some three hours of recording and is in digital format. The archived interview was taken by Liana Petrescu, and is accompanied by a file entry on the interviewee which summarises the content and provides Aristina Săileanu-Pop’s biographical details. An edited transcript of the recording was reproduced in the volume Să trăiască partizanii până vin americanii! Povestiri din munţi, din închisoare şi din libertate (Long live the partisans till the Americans come! Recollections from the mountains, from prison, and from freedom) published by the Civic Academy Foundation publishing house in 2008. The interview includes accounts not only of the personal experiences of Aristina Săileanu-Pop, but also of similar experiences of other members of her family and other partisans involved in the resistance movement in the mountains of Maramureş. These either did not survive the prison experience that followed their capture by the Securitate troops or they were older and passed away before the fall of communism, without having the possibility of narrating the traumatic experiences they had been forced to undergo. Aristina Săileanu-Pop considers that it is her duty to preserve their memory too.

As regards the significance of her own confrontational experience, Aristina Săileanu-Pop believes that her personal victory over the communist experiment in the history of Romania was due to her refusal to give up Christian moral principles: “It was a victory for all those who kept normality. I consider myself one of them. A peasant, I was and I remain a normal person; neither I nor my relatives had any inferiority complexes. My father was often in the company of important people of the time, although he was a forester. When Constantin Brătianu handed over the land, forests and all, to the people of Lăpuş, my father invited him to dinner and then they danced the Unification Hora together. We didn’t suffer any inferiority complexes. We always thought it was to the benefit of the country for there to be as many intellectuals as possible. From our village a host of boys and girls left for high school, because the peasant wanted his child to get book learning. Now, this “class” hatred was something incomprehensible; it exploited all the worst in people. It destroyed so many destinies; it left behind it suffering and death; it wanted to separate people from God. To take away their faith, hope, and love. The experiment you speak of ended with an ocean of injustices. I am just a drop in that ocean.”

In the preface to the volume mentioned above, Romulus Rusan responds to this story that is so moving in its simplicity, and offers a very beautiful portrait of a strong character, worthy to be taken as a life’s model: “Aristina Pop passes through the most terrible sufferings, but always finds a protective hand to defend her. She is the person who knows how to make herself loved because she is incapable of hate. She disarms the investigators by her ingenuousness, the women guards by the fact that she could be their child, the doctors by the altruism of her youth. […] She does not lose her faith, refuses resignation, continues to hope. After she comes out of prison, when the Securitate try to use her, she tells them they would do better to send her back behind bars. She gets married ‘at first sight’ to a young man, Nicolae Săileanu, who had been in the same prison as her and who had fallen in love with her without knowing what she looked like, just from hearing her story. [...] How did such a character manage to make herself loved in a world of hate, of class struggle? The secret is Aristina’s alone, and consists, beyond doubt, in her innate knowledge of how to remain normal in a world of abnormality.”