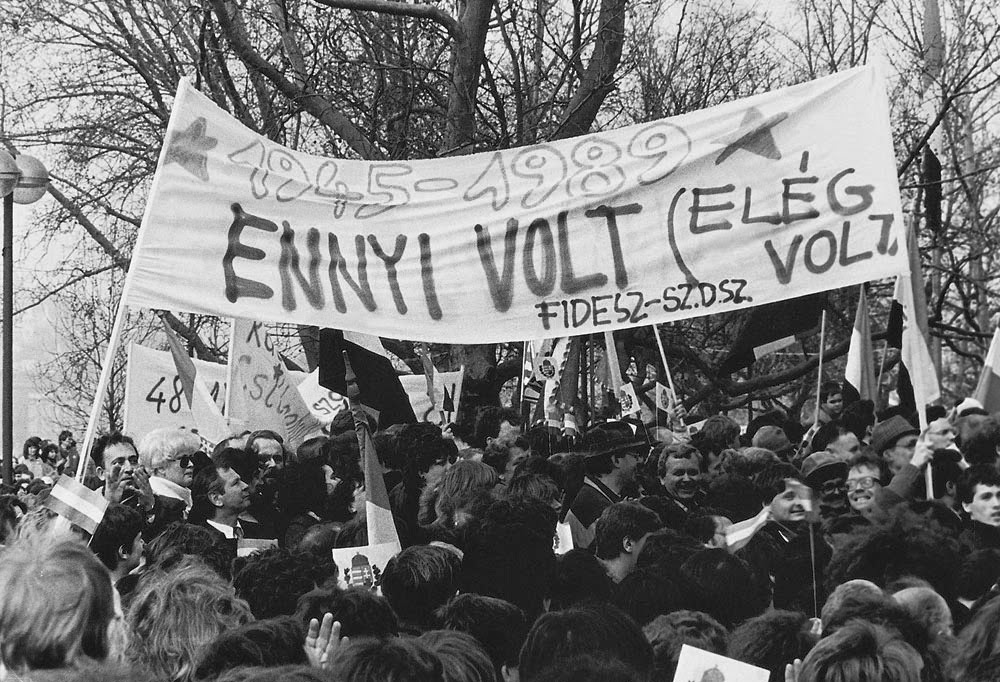 By the spring of 1989, Hungary had managed to halfway through the process of political transition: the political monopoly of the one-party communist system had already been shaken, but civilian society and democratic forces still could not break through the colossal structure of the forty-year-old monolithic regime. There were fewer and fewer legal and political barriers to democratic organizations, and the main obstacles were the lacks of finances and media coverage concerning the awakening society and the political opposition. Independent media channels and organs in the print press which could inform the public efficiently about major political changes were still badly needed in the country. Similarly, there was not adequate public space or office infrastructure for the newly launched local and national movements, proto-parties, organizations, student clubs, trade unions, etc. The accelerated process of forming new parties, together with the beginning of the Roundtable Sessions of the Democratic Opposition and then the Nationwide Negotiations made it clear that the traditional semi-conspiratorial, amateur strategies used by the oppositional forces were wholly insufficient to remove the old monopoly power system.

From the outset, Soros Foundation Hungary (HSF), as the main supporter of independent civilian initiatives, realized that it was time to overtly “underwrite democracy,” to borrow from the title one of the books by Soros. In the spring of 1989, Soros publicly offered a sum of one million US dollars in support of the newly launched democratic organizations. The grand curatory (the main decision-making Advisory Board) discussed the practical details of the planned project at two sessions. The call for applications was then published, and an operative staff was formed in May to manage the project, led by László Sólyom. It included Gábor Fodor, Elemér Hankiss, László Kardos, and a dozen members of the SFH secretariat.

The new support project, as was expected, became extremely popular within a short period of time, and the deadline for the submission of applications was eventually extended six times to eighteen months, with more than double the sum Soros originally had intended to spend on the project. (It proved to be an almost ceaseless rally, which is well reflected in the fact that, as late as October 1990, there was still a package of 25 new applications for support waiting to be assessed, most of them convincing cases with rightful claims.) In 1989, 353 applications were received from various parts of the country. During the first year run of the project, the Advisory Board of the Soros Foundation Hungary approved claims made by 157 applicants and donated a total of 44 million Hungarian forints. It also distributed badly needed office equipment: 49 copy-machines, 26 computers, 12 telefax machines, 6 phone sets with recording machines, and 3 laser printers.

Some of the successful applicants gained support from the Soros Foundation Hungary in 1989–1990:

Of the roughly 500 applicants, 201 organizations and organs (printed press, local radio and tv channels) received valuable financial and material help from the Soros Foundation Hungary. The project, the deadline for which was extended six times, lasted until late 1990, and it distributed more than double the originally offered sum, i.e. significantly more than two million USD.

The complete archival collection of the project (applications, letters of support, secretarial reports, minutes of curatory sessions, press clippings, and files of the former secret police) can be found in the OSA-Blinken Archives. The detailed list of the organizations which were given support were also published in the 1989 and 1990 Yearbooks of the Soros Foundation Hungary. See their online version here.