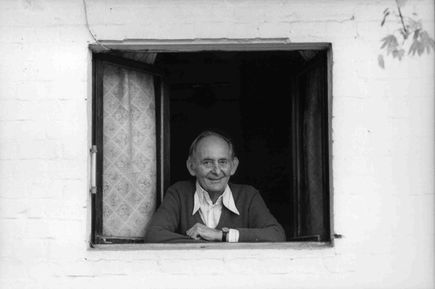 Robert Havemann was a prominent GDR dissident and a symbolic figure for political protest within East Germany. At the beginning of the 1930’s, the trained chemist belonged to the “Begin Anew” resistance group, composed of members from both the Social Democratic (SPD) and Communist (KPD) parties. In 1943, he was a member of the short-lived “European Union” resistance group that was quickly betrayed and rounded up. Havemann was sentenced to death, but survived the Brandenburg penitentiary and after 1945 agitated owing to his own ideological convictions for the GDR. In 1950, he became director of the institute for Physical Chemistry at the Humboldt University in Berlin, and later a member of the People’s Chamber (Volkskammer). Khrushchev’s revelation and denouncement of crimes committed during the reign of Stalin deeply shook Havemann and he began to speak publicly about the hypocrisy and barriers within the GDR. In a captivating lecture series in 1963/64, he turned publically against the policies of dogmatism and paternalism. He fought for the freedom of the individual within Socialism until his party membership was revoked in 1964, he was forbidden to work in 1965 and finally, barred from the Academy of Sciences in 1966. Ten years later on the heels of his protest at the expatriation of Wolf Biermann, he was placed under house arrest. His home in Grünheide (Berlin) continued to function as one of the most important centers for socialist reform within the GDR.