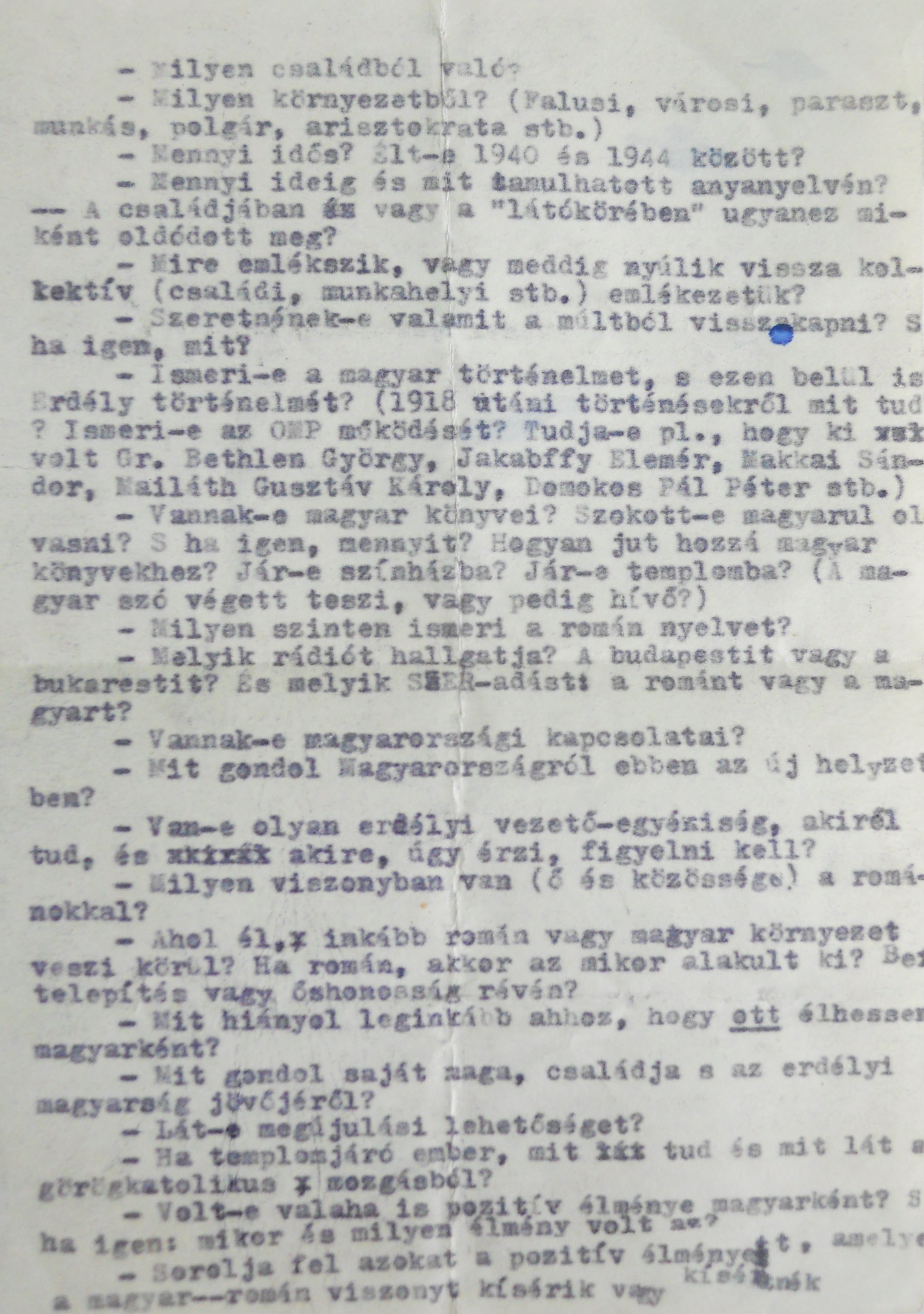 Judging from the level of difficulty of the twenty-two questions contained in it, the target group of the document identified as a questionnaire included the most sophisticated members of the Hungarian elite in Romania, who did not necessary work in the cultural sphere, but who had presumably been selected as a result of previous inquiries. The questionnaire, made up of three major sets of questions, first assesses the social status, qualification level, and general culture of the subject, then examines the subject’s sense of identity, and finally investigates, also out of a need for identifying a solution, the nature of the connections and relationships between Romanians and Hungarians, as well as experiences regarding coexistence.

I. The first set of questions focuses on the subject’s social status. It begins by examining the social background of the subject – family, origin – and then inquires about his/her age to further turn to a direct reference to the “small Hungarian world” in Northwestern Transylvania during the Second World War (Sárándi and Tóth-Bartos, 2015), which suggests that the questionnaire focuses primarily on mature individuals holding well-defined views on the Transylvanian issue. Questions four and five address the length and possibilities of past education in the mother tongue in the family of the subject, respectively, in his/her “range of vision.”

1. What kind of family do you come from?

2. What type of social environment do you come from? (rural, urban, peasant, worker, bourgeois, aristocrat, etc.)

4. How long and what were you able to study in your mother tongue?

5. What about your family and /or “range of vision”?

II. The second set of questions – questions 6 to 14 – is directed at the subject’s sense of identity. The assessment of collective memory is followed by a nostalgic question, which, beside the inventory of violations of human rights experienced in the present, makes the subject draw a comparison with the rights undoubtedly held in the past. The question about general knowledge of Hungarian history is followed more emphatically by that about self-declared knowledge of post-1918 Transylvanian history and of the public figures related to it. Then the author of the questionnaire moves on to the mapping of reading habits and needs in the mother tongue, of cultural life and religion. The question referring to the level of Romanian language skills is still relevant. As the knowledge of language represents a prerequisite for social integration, this also means that as long as the coexisting nations are unable to eliminate language barriers, their cultures cannot get closer to each other, cannot coexist in harmony. Radio listening habits provide answers regarding the need for information of Hungarians in Transylvania, but also about their possible resignation and indifference. The inquiry about connections in Hungary presupposes the existence of a current network of contacts in the “mother country,” including relatives, friends, and acquaintances. The thirteenth question, about the new situation in Hungary – which offers a clue about the date of the document – presumably hints at the changes that took place during the official mandate of the moderate reformer Károly Grósz, appointed president of the Council of Ministers in June 1987. On May 1988, the reform wing of the Hungarian Socialist Workers’ Party (MSZMP) obtained the long-awaited goal of removing the old and ill János Kádár from the party leadership and elected Grósz as his successor upon a programme of transition to a market economy and political decentralisation. However, it cannot be excluded that allusion was made to symbolic events of 1989 relating to the commemoration of the Revolution of 1956, such as the reburial of Imre Nagy and his comrades, or the radio speech by the senior party official Imre Pozsgay about the re-evaluation of this tragic event in Hungary’s recent past (Romsics 2013). The last question in this section, referring to a “prominent Transylvanian personality” takes into consideration the greater political events and perhaps it looks ahead in allowing for an unpredictable political turn in Romania.

6. What can you recall, or how far back does your collective (family, workplace, etc.) memory extend?

7. Would you like to regain anything from the past? If yes, what?

8. Are you familiar with Hungarian history, and with the history of Transylvania in particular? (What do you know about the events following 1918? Are you familiar with the operation of the Hungarian National Party [Bárdi 2014, Horváth 2007, György 2003]? Are you familiar with figures such as Ct. Bethlen György [1888–1968, president of the Hungarian National Party representing the Hungarian minority in Romania in the interwar period (ACNSAS, I185019)], Jakabffy Elemér [1881–1963, Hungarian, later Romanian Hungarian politician, lawyer, publicist (Balázs 2012, Csapody 2012)], Makkai Sándor [1890–1951, Transylvanian Hungarian writer, pedagogue, Reformed bishop (Veress 2003)], Mailáth [Majláth] Gusztáv Károly [1864-1940, Transylvanian Roman Catholic bishop, member of the nobility, honorary archbishop (Marton and Jakabffy 1999)], Domokos Pál Péter [1901-1992, teacher, historian, ethnographer, one of the pioneers of research into the Csangos (Jánosi 2017, Domokos 1988)] etc.?

11. Which radio station do you listen to? That of Budapest or that of Bucharest? And which Radio Free Europe broadcast do you listen to: the Romanian or the Hungarian one?

12. Do you have contacts in Hungary?

13. What do you think of Hungary in this new situation?

14. Is there a prominent Transylvanian personality you know about and consider worth paying attention to?

III. The third set of questions – questions 15 to 22 – analyses the relationship between Romanians and Hungarians. Thus, beside inquiring about the nature of relationships maintained by the subject and his/her environment with his/her ethnic Romanian fellow citizens, these questions focus also on the ethnic characteristics of the coexisting population, whether the demographic balance in a given settlement, which was centuries ago favourable to the Hungarian community, has been subject to modifications by the communist regime by attracting inhabitants from other regions populated mostly by Romanians. Having future coexistence in view, question 17 is aimed at learning the “lacking needs” of the subject, so it inquires about the required minimum conditions in terms of human rights that allow him/her to live as a Hungarian there, in that given place. Amidst the measures aimed at the assimilation of the Hungarian minority in Transylvania, such as the continuous diminishing of educational opportunities in the Hungarian language, the closing down of Transylvanian Hungarian theatres, the potential destruction of villages, the phenomenon of emigration, which affected the Romanian citizens too, in the context in which the nationalism of Ceaușescu’s regime was become more and more radical, when politics-fuelled intolerance towards ethnic otherness was a daily presence, the question about individual views regarding the future of the minority community might have seemed surreal. Thoughts referring to the renewal of the indigenous minority were closer to utopia as the flagrant violation of human and minority rights provided no realistic grounds for this. The last two questions of the questionnaire – questions 21 and 22 – about positive experiences as a Hungarian living in Romania, positive experiences concerning the Romanian–Hungarian relationship – illustrate, even in their choice of words – “have you ever,” “accompany or would accompany” – the perspicacity with which the author of the questionnaire acknowledges the situation of the Transylvanian Hungarian minority of the period preceding the change of regime.

15. What is the nature of your (your personal and your community) relationship with Romanians?

16. Are you surrounded mostly by Romanians or by Hungarians in your living environment? If you live predominantly surrounded by Romanians, when was this situation installed? Is it a result of incoming settlement or is it the indigenous population?

17. What is it that you lack most in living there as a Hungarian?

18. What is your opinion about your own future, the future of your family, and that of Transylvanian Hungarians?

19. Do you see any possibilities of renewal?

20. If you are a church-goer, what do you know and what can you witness from the Greek Catholic movement?

21. Have you ever had any positive experiences as a Hungarian? If yes: when and what kind of experience was it?

22. List the positive experiences that accompany or would accompany the relationship between Romanians and Hungarians?

There is no doubt that Gyimesi is the author of this document. In numerous places her works include analyses of the given situation and sense of identity of the Hungarian minority in Transylvania (Gyimesi 1993). Most probably the document escaped the attention of secret police officers conducting the home search on 20 June 1989 due to the absence of title and date. The physical existence of a questionnaire examining minority life in the darkest days of Romanian Communist dictatorship is startling in itself. Research conducted in the form of questionnaires presupposes the subject’s right to free opinion and is interpreted as an accessory of democratic systems. However, the existence of the document does not mean that the intended survey was actually conducted. For Gyimesi, who was the subject of informative surveillance, in a world abounding in collaborators with the secret police, this questionnaire must have meant a handhold which should have helped her in identifying persons with similar views on whom she could have counted in the struggle against the violation of human and minority rights. This may have served as a basis – as a possible interpretation – for her efforts to recruit reliable colleagues for the editing and distribution of the Cluj-based samizdat paper known as Kiáltó Szó, which she conceived in the fall of 1988 together with Sándor Balázs, a philosopher and university professor. Out of the nine edited issues of the samizdat – which was little known even by the Securitate – only two were published, though this had nothing to do with the editors: the publishing of further issues was rendered unnecessary under the circumstances following the fall of the Ceaușescu-dictatorship.