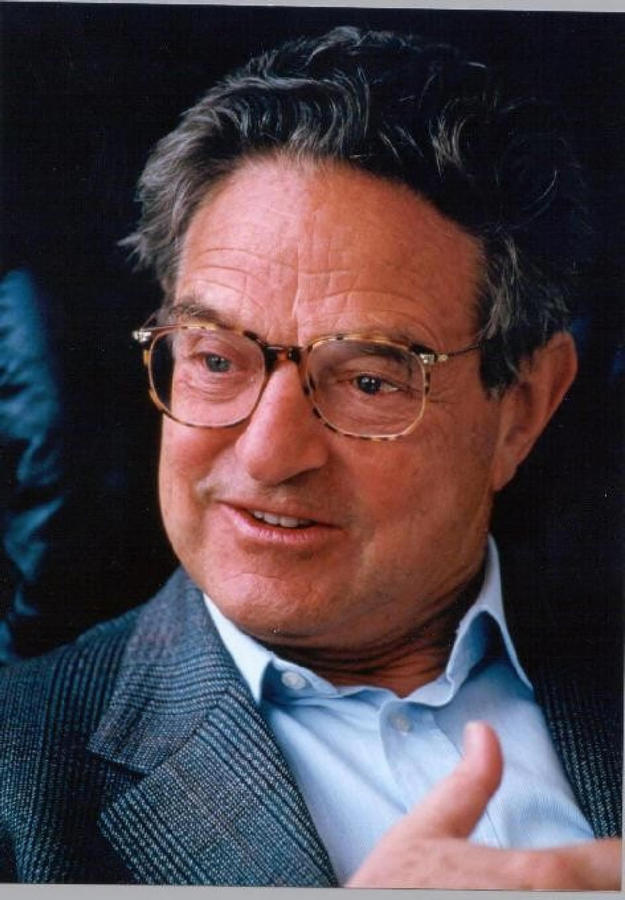 George Soros (born in Budapest in 1930), an American businessman of Hungarian descent, is one of the world’s foremost businessman and philanthropists, having given away over $12 billion to date. His funding has supported individuals and organizations across the globe fighting for freedom of expression, transparency, accountable government, and societies which promote justice and equality.

His efforts have often focused on those who face discrimination purely for who they are. He has supported groups representing Europe’s Roma and others who have been pushed to the margins of mainstream society, such as drug users, sex workers, and LGBTI people.

Soros experienced intolerance firsthand. Born in Hungary in 1930, he lived through the Nazi occupation of 1944–45, which resulted in the murder of over 500,000 Hungarian Jews. His own Jewish family survived by securing false identity papers, concealing their backgrounds, and helping others do the same. Soros later recalled that “instead of submitting to our fate, we resisted an evil force that was much stronger than we were—yet we prevailed. Not only did we survive, but we managed to help others.”

As the communists consolidated power in Hungary after the war, Soros left Budapest in 1947 for London, working part-time as a railway porter and a nightclub waiter to support his studies at the London School of Economics. In 1956, he emigrated to the United States, entering the world of finance and investments, where he made his fortune.

In 1970, he launched his own hedge fund, Soros Fund Management, and went on to become one of the most successful investors in the history of the United States.

Soros used his fortune to create the Open Society Foundations, a network of foundations, partners, and projects in more than 100 countries. Its work and its name reflect the influence on Soros’s thinking of the philosophy of Karl Popper, which Soros first encountered at the London School of Economics. In his book Open Society and Its Enemies, Popper argues that no philosophy or ideology is the final arbiter of truth, and that societies can only flourish when they allow for democratic governance, freedom of expression, and respect for individual rights—an approach at the core of the work at the Open Society Foundations.

Soros began his philanthropy in 1979, giving scholarships to black South Africans under apartheid. In the 1980s, he helped promote the open exchange of ideas in the communist Eastern Bloc by providing photocopiers with which people could make copies of banned texts. After the fall of the Berlin Wall, he founded Central European University as a space to foster critical thinking, a concept which at the time was alien to most universities in the former Soviet states. He funded cultural exchanges between Eastern Europe and the West, playing a pivotal role in helping the Soviet society he himself had briefly lived in open itself to the world.

With the Cold War over, he expanded his philanthropy to the United States, Africa, and Asia, supporting a vast array of new efforts to create more accountable, transparent, and democratic societies. He was one of the early prominent voices to criticize the war on drugs as “arguably more harmful than the drug problem itself,” and helped kick-start America’s medical marijuana movement. In the early 2000s, he became a vocal backer of same-sex marriage efforts. Though his causes evolved over time, they continued to harmonize with his ideals of an open society.

Over the years, Soros has supported paralegals and lawyers representing thousands of unlawfully held individuals, underwritten the largest effort in history to integrate Europe’s Roma, and provided school and university fees for thousands of promising students from marginalized groups. And he has reached beyond his own foundation, supporting independent organizations such as Global Witness, the International Crisis Group, the European Council on Foreign Relations, and the Institute for New Economic Thinking.

Now in his 80s, Soros continues to take an active personal interest in the work of Open Society Foundations, traveling widely to support its work and advocating for positive policy changes with world leaders both publicly and privately.

But throughout Soros’s philanthropic career, one thing has remained constant: a commitment to fighting the world’s most intractable problems. He has been known to emphasize the importance of tackling losing causes. Indeed, many of the issues Soros has taken on (and he would be the first to admit this) are the types of issues for which a complete solution might never be found.

“My success in the financial markets has given me a greater degree of independence than most other people,” Soros once wrote. That independence has allowed him to forge his own path towards a world which is more open, more just, and more equitable for all.

Today, Soros is considered one of the 30 wealthiest men in the world, though he has lately donated two-third of his private fortune as down-payments for public humanitarian projects undertaken by philanthropic and human rights institutions worldwide. Although he continues to be passionately attacked by countless nationalistic propagandists and populist governments in several countries, he has remained a devoted defender of democracy, human rights, and social justice.