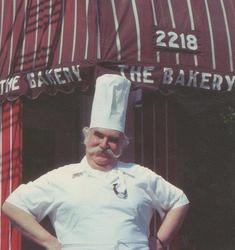 Lajos Szathmáry (1919–1997) was a poet, journalist, book and art collector, master chef and restaurant owner. Szathmáry was a generous supporter of the émigré scouting movement for many decades. He was born in 1919 to Transylvanian refugee parents in Rákosrendező on the outskirt of Budapest. He was educated at prestigious and traditional Calvinist Reformed Church elementary and secondary schools, first in Budapest then in Sárospatak. During the Second World War, Szathmáry was a journalist and a soldier. He left Hungary in late 1944 and never returned to his native land, though he remained a Hungarian patriot all his life. He lived for a few years as a refugee in Salzburg, Austria, then in 1951 he left for the United States and settled in the city of Chicago. Here Szatmáry opened a Hungarian restaurant in 1963 named The Bakery, which he ran until 1989. Szathmáry was not only a famous chef himself, but also a popular author of cookbooks in both English and Hungarian. He was also knowns as a passionate collector of books, manuscripts, art and maps. He donated the majority of his private collection to U.S. libraries and museums, although he presented his large and precious Hungarian book collection to the College of Sárospatak and the Gáspár Károli Calvinist Reformed Church University in Budapest. Some of his valuable manuscript holdings were recently acquired by the Hungarian National Archives and the Petőfi Literary Museum.