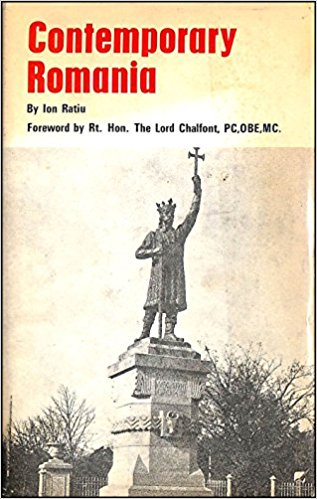 During half a century spent in exile (1940–1990), Ion Raţiu manifested a constant interest in the political situation in Romania under both Antonescu and communist dictatorships. His involvement was materialised in various initiatives of organising the Romanian exile in Western Europe or writing about Romanian issues either as a journalist or as a political analist. His writings represent a coherent critical aproach to communist regimes and distinguish themselves through the contributions they make to a complex analysis of Soviet propaganda abroad, especially in the developing countries (such that provided in Moscow Challenges the World), but also through the astute observations on the features of Ceauşescu’s regime in the essay Contemporary Romania: Her Place in World Affairs. This is a critical evaluation of what was perceived at that time in the West as a detachment of the Romanian communist regime from Moscow’s strict control. In the first part of the book, Raţiu provides an overview of the history of the Romanian Communist Party before its coming to power and of the first decade of the communist regime in Romania. In the second part, the author delivers a critical assessment of the “nationalist turn” of Romanian communism during the 1960s and early 1970s. His main hypothesis is that the nationalism of the Romanian communist leaders, especially Gheorghiu-Dej, was not a “genuine” one because the latter had not displayed any nationalist attitudes previously (Raţiu 1975, 31–33). On the contrary, up to the mid-1950s, he was a servile instrument of Soviet policies in Romania. According to Raţiu, the “nationalist turn” makes sense in the context of the conflict with Moscow caused by the changes that the Soviet leaders wanted to impose on COMECON, which would have stopped the industrialisation drive in Romania and transformed it mainly into an exporter of primary commodities and an importer of industrial products. In the third part, Raţiu analyses the evolution of relations between the Soviet Union and Ceauşescu’s Romania during the first part of the 1970s and questions Ceauşescu’s Romania’s “independence” in relation to Moscow. In the last part of the book, Raţiu emphasises that this image of an “independent” Romania in the Eastern Bloc is the result of Ceauşescu’s skilful policies, which have created in the West the illusion that the real tensions of the 1960s have continued. The author argues that simulating conflict with Moscow has became a “profitable business” for Ceauşescu, due to the Western economic support he has obtained with this attitude. Raţiu’s book is one of the first critical assessments that questioned the positive image that Ceauşescu’s regime skilfully created in the West during the late 1960s and early 1970s. Raţiu also provides a complex analysis of the contradictions of Ceauşescu’s regime between its foreign image and its inner ossification in Stalinist political practices: “While maintaining doctrinal purity at home of a strict Stalinist type, the Romanians gradually became the champions of tolerance towards other roads to socialism, and in fact raised this tolerance to the rank of a principle” (Raţiu 1975, 36–37).