Informative note of the Securitate regarding Alexandru Călinescu, 1989 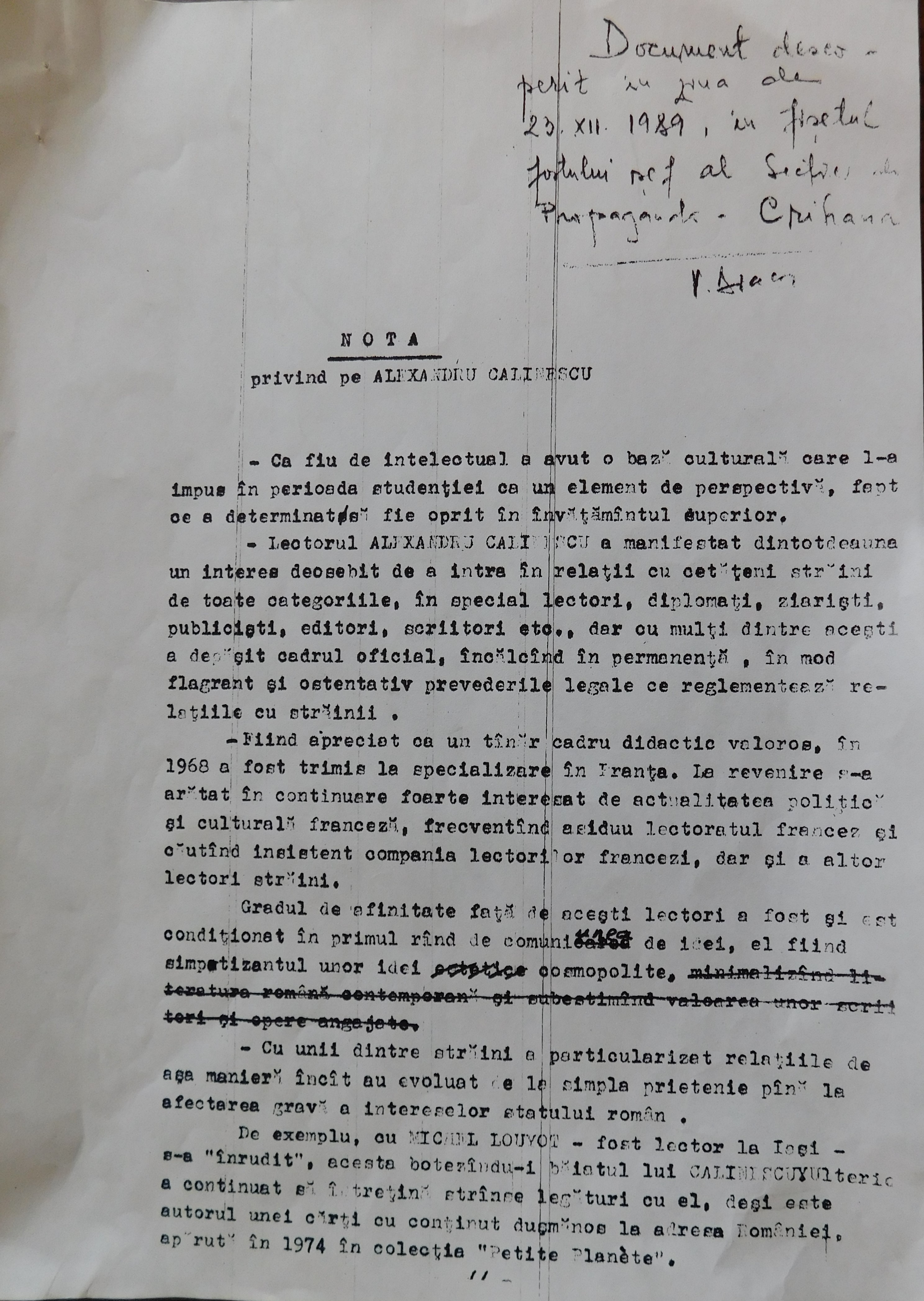 One of the documents in the Alexandru Călinescu private collection reflects the perspective from which this critical intellectual in Iaşi was regarded by the authorities in the last years of communism, when the dissidents in the city, including Alexandru Călinescu, became radicalised in their attitude towards the Ceaușescu regime. The document was discovered on 23 December 1989, in the cabinet of the person who had been propaganda secretary for Iaşi county up until the previous day, and thus came into the possession of Alexandru Călinescu. It had also been sent, as Alexandru Călinescu recalls, to the then rector of A.I. Cuza University of Iaşi, “so he would work on me, but without success, of course,” he adds. This document was published by the former dissident in 2018 under the suggestive title “My life told by the Securitate,” together with other documents of the same type and an article summarising the context of the last two years of communism in Romania.

The Securitate informative note begins by recalling the intellectual origins of the person in question and emphasising that “he has always manifested a particular interest in entering into relations with foreign citizens of all categories, especially language assistants, diplomats, reporters, journalists, writers, etc., but with many of these he exceeded the official context, […] repeatedly transgressing in a flagrant and ostentatious manner the provisions regulating relations with foreigners.” Because he had “cosmopolitan” ideas and implicitly a “communion of ideas” with some of these foreigners, “he particularised the relations in such a manner that they developed from simple friendship to seriously affecting the interests of the Romanian state,” the document continues. The informative note on Alexandru Călinescu emphasises his role as the leader of the oppositional group around the magazine Dialog: “He has been considered the mentor of a group of young people with literary ambitions, launched by the above-mentioned publication, and has appointed himself a ‘school leader’ of the so-called ‘1980 generation,’ to whom he has passed on his harmful ideas.” The articles published in Dialog under the direction of Alexandru Călinescu by him and his disciples are characterised as being ‚ “of a contestatory character, which has attracted the attention of reactionary circles in the West, who provided them with publicity through the ill-famed radio station Free Europe.” As the leader of the new generation at Dialog, which he directed towards “hostile activities,” Alexandru Călinescu was considered to have “arrived at the threshold of treason,” resulting – according to the note – in no more than a sanction through Party structures with a “vote of blame.” The note goes on to emphasise that the individual in question “has not drawn appropriate conclusions from the measures taken in 1983. Making a mockery of the good advice and disregarding the clemency that was shown in his case, he has continued to maintain the same position, at first more prudently, then more and more openly and ostentatiously.” The document then recounts how Alexandru Călinescu “has gone further down the slope of treason,” by facilitating Dan Petrescu’s and Liviu Cangeopol’s meetings with French journalists to whom they granted interviews “with a particularly hostile content,” and thus becoming “the coordinator from the shadows of the alleged Iaşi dissidence.” Moreover, the document states, Alexandru Călinescu has shown solidarity with the dissidents in Bucharest, who have taken a public position in defence of Mircea Dinescu. The conclusion of the informative note with regard to the individual under surveillance is that “he more and more often exteriorises ideas inciting opposition to the socialist regime in our country, […] letting himself be influenced by what is happening in other socialist countries.” It is interesting to observe the interpretive key in which the Securitate informative note narrates all these real actions of contestation of the regime, as a result of which Alexandru Călinescu had become at the end of the 1980s one of the most heavily surveilled critical intellectuals in Iaşi and indeed in the whole of Romania. In the words of the secret police documents, “by the hostile actions he has carried out, especially in the last two years, […] Alexandru Călinescu has proved [...] that he has crossed the threshold of treason to the country and has become a tool of reactionary circles in the West, through which he has seriously compromised his status as citizen, Party member, and university teacher.” In other words, all that after 1989 became an act of courage was considered an act of treason before 1989.