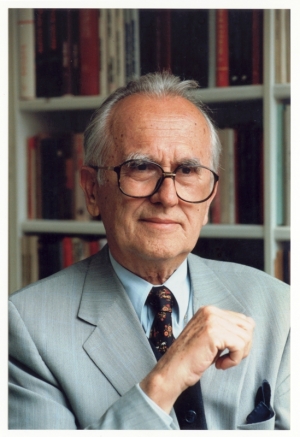 Adil Zulfikarpašić was born in the eastern Bosnian town of Foča in 1921. As a pupil, he joined the Communist Party of Yugoslavia. During the Second World War, the Ustasha (Croatian fascists) condemned him to death, but he managed to escape. After the Second World War, Adil Zulfikarpašić was the assistant of the Minister of Trade in the Government of the People's Republic of Bosnia and Herzegovina.
However, in 1946 he went into exile, first to Trieste (Italy), then to Rome and later to Innsbruck (Austria). In 1954 he moved to Switzerland. Adil Zulfikarpašić began his political struggles for Bosniak causes in Switzerland and was recognized as a prominent representative of the Bosniak diaspora.
Upon his return to Bosnia and Herzegovina, he participated in the pre-election campaign of the first multi-party elections in 1990. First, he was a member of the Party of Democratic Action, but after a disagreement with Alija Izetbegovic and with the leadership of the party, he became the leader of the Muslim Bosniak organization (MBO), along with Muhamed Filipovic and Fehim Nametak. One of the first disagreements between Izetbegović and Zulfikarpašić was over the name of the party: Zulfikarpašić insisted that the term Bosniak be included in the party's name. Unlike Izetbegović, Zulfikarpašić also wanted a more liberal political party. Adil Zulfikarpašić died in Sarajevo on 22 July 2008.