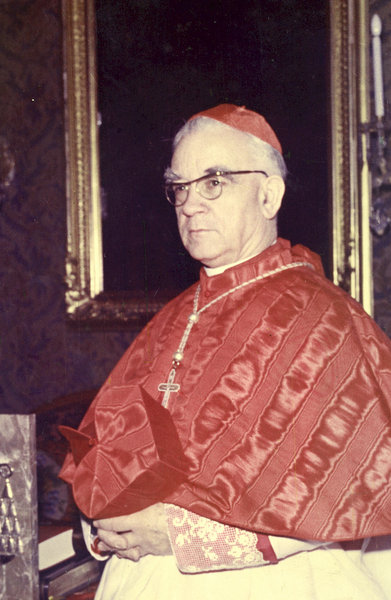 László Lékai (né Lung) was born in Zalalövő as the first child of a religious family. His father was a potter. He changed his surname to Lékai in 1940. His person and his church leadership activities, his connection with the socialist political era, and his “small steps” policy towards the state are remembered as controversial. He pursued studies in Nagykanizsa and Veszprém. He was a novice at the Veszprém bishopric. In 1928, he began studying in Rome at the Collegium Germanicum et Hungaricum. He started his priestly service in Ukk (a village in Veszprém County, Hungary) and later became a prefect at Davidicum in Veszprém. In 1944–1945, he was imprisoned in Sopronkőhida (a village in northwestern Hungary) with József Mindszenty. He was a priest in the villages of Balatonlelle, Zalaszentiván, and Badacsonytomaj. In 1972, he was ordained. His legacy is very controversial. In 1976, he was nominated bishop of Esztergom by Pope Paul VI, but with the endorsement of the Hungarian Socialist Workers’ Party. During this period, when religious life was persecuted by the communist authorities, Lékai was not in an easy situation. He had to cooperate with the political leaders, but this was difficult because any sign of cooperation damaged relationships with believers. The Állami Egyházügyi Hivatal [State Church Office] pressed the Church elite to cooperate, which was, in fact, in accordance with the policy of the Vatican.

Lékai followed a “small steps” policy, and he supported Christian publishing, theological education, and the construction of churches. He also recognized the close relationship between elite religion and folk religion, and he supported research endeavors on religious folklore. He also supported Zsuzsanna Erdélyi in her efforts to create a collection of religious objects.