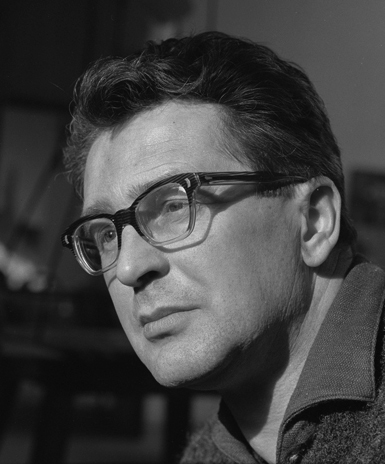 Vladimír Janoušek was a Czech sculptor and painter. He graduated from the Academy of Applied Arts in Prague in 1950. He met his future wife, Věra Janouškova (neé Havlová), also a sculptor, while he was studying there. He belonged to the generation of sculptors who tried to set themselves against socialist realism through their work, drawing inspiration from the interwar avant-garde. In 1960 he became the founding member of the UB 12 art group. When creating his sculptures, Janoušek would weld together metal materials. Figures featured predominantly – his characters were often surrounded by constructions made from wire. During the mid-1960s, his sculptures began to take on more of a technical character and resembled machine mechanisms. Janoušek became an “undesirable” sculptor during Normalization – he was forbidden from exhibiting in public and his designs were rejected from public competitions. During this period, his work was principally inspired by movement. In addition to sculpture, Janoušek also devoted himself to painting and drawing.