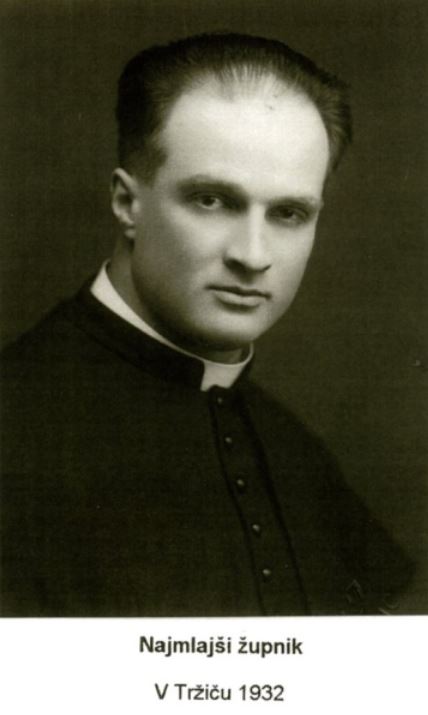 Anton Vovk was a Slovenian cleric, the (arch)bishop of Ljubljana. He was born in the same house as the famous Slovenian poet France Prešeren (1800-1849), because they were related through Vovk's grandmother. He attended Gymnasium in Kranj, and entered the seminary at Šentvid. He was ordained a priest in 1923. He served as chaplain in Metlika and Tržič. He became the pastor in Tržič. In 1940 he became a canon. Throughout the Second World War he presided over a committee tasked with helping priests who fled from the German-occupied part of Slovenia to the Ljubljana Province. In 1944 he became the rector of the seminary.

In June of 1945 he became the vicar of the Ljubljana Diocese, because Bishop Gregorij Rožman fled the country ahead of the takeover by the communist regime. On December 1, 1946, he was consecrated as auxiliary bishop of Ljubljana. He was attacked at the Novo mesto rail station on January 20, 1952, by communist activists, who poured gasoline on him and tried to set him on fire.  Anton Vovk died on July 7, 1963.

Vovk's primary concern and job was to lead the Ljubljana (arch)diocese as a bishop (Pope John XXIII elevated the Ljubljana Diocese to an archdiocese on December 22, 1961). He was the creator or receiver of most of the archival materials contained in the Anton Vovk Collection. He considered the preservation of the collected records so important that he kept the existence of his own diary secret even from his closest collaborators. The communist regime saw him as an enemy, so an attack was prepared against him by pouring gasoline on him and burning him. Vovk himself did not publicly challenge the regime, except when he publicly preached Catholic teachings. The purpose of collecting the materials was to preserve them for the generations.