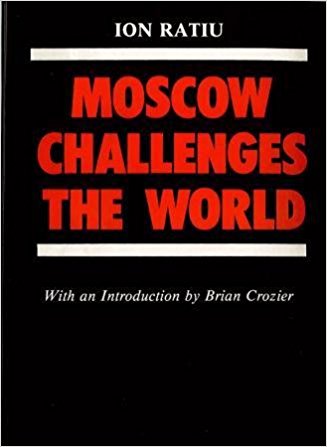 When the National Legionary State was proclaimed in Romania in September 1940, Ion Raţiu chose to resign from the post he occupied at the Romanian Legation in London and asked for political asylum in the United Kingdom because he did not want to serve the new fascist regime in Bucharest. He became involved in the organisation of the Romanian exile and worked as a journalist specialising in topics related to Romania. In this position he acquired a good knowledge of postwar East European political affairs. Besides radio shows and newspaper articles, his expertise was also materialised in various academic works such as: Policy for the West (1957), Contemporary Romania: Her Place in World Affairs (1975), and Moscow Challenges the World (1986). Although published in 1986, the first draft of the book entitled Moscow Challenges the World was written in the period from 1946 to 1950, when due to health problems Raţiu spent long periods in a sanatorium in Switzerland. Raţiu launched his own business during the late 1950s, and thus for a time invested less effort in continuing his researches. He resumed these academic activities during the 1970s and the opportunity to publish the book in an updated form occurred during mid-1980s. At that moment the intensification of the Cold War during the Reagan administration aroused the interest of the public in contributions concerning the Soviet Union and its foreign policy. The book reflects the theoretical approach to communist regimes marked by the concept of totalitarianism that was dominant in Western academia during late 1940s and 1950s. In its four parts, Raţiu offers a critical overview of the intellectual sources and the main components of the Marxist-Leninist official ideology; he provides an explanation why the 1917 Revolution succeeded in Russia, analyses the strategies and techniques used by Moscow to “export” the revolution, and delivers a complex insight into how the economy works in communist societies and what the social effects of their economic system are. The most relevant contribution of Raţiu’s book to a better knowledge of the Soviet System consists in his analysis of the strategies developed by Moscow of manipulating communists and communist sympathisers abroad in order to reach its goals: “In communist thinking there is no division between domestic and foreign policy. The world is divided vertically into chunks. It is divided horizontally into two layers: the exploiters and the exploited. There is only one ‘nation,’ the proletariat, and one foe, the capitalists and their lackeys. Consequently, the true home of the ‘nation’ is the land where the foe is defeated” (Raţiu 1986, 106). Following this argument, Moscow presented the “defence” of the Soviet Union as “the first duty, therefore, of all communists, whether they live inside Russia or outside it” (Raţiu 1986, 166–168). According to Raţiu’s analysis, these Soviet strategies represented effective tools for influencing public debates in the West and expanding its system of satellite countries in the developing world.