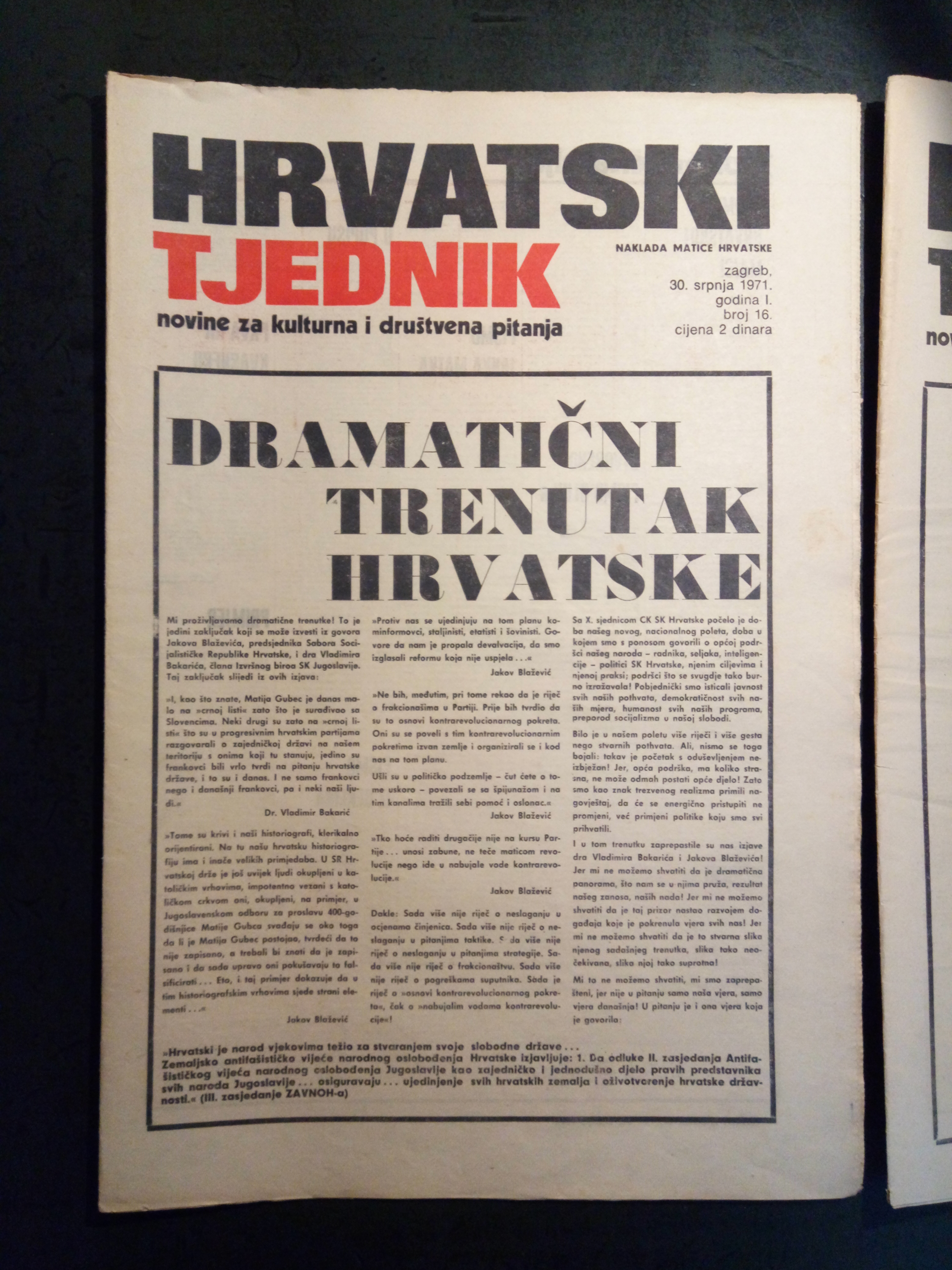 Hrvatski tjednik (in its sub-title it was defined as a newspaper for cultural and social issues) was a periodical published by Matica hrvatska (MH) in 1971 (from April 16 to December 3). It was launched at the peak of the Croatian Spring and soon became the primary media through which the MH and a circle of intellectuals gathered around it spread the ideas of this national reform movement. In advocating for Croatian cultural integration and equality within the Yugoslav federation, the paper openly criticised the socialist regime due to its economic-political, demographic and cultural failures. It was the most vocal media of the Croatian Spring that shared the destiny of the movement. After a precipitous ascent, the government extinguished it.

The first editor-in-chief was Igor Zidić (no. 1-13), who was succeeded by Vlado Gotovac (no. 14- 33), while the managing editor was Jozo Ivičević. The editors and authors of Hrvatski tjednik were prominent Croatian intellectuals (Stjepan Babić, Zvonimir Berković, Dubravko Horvatić, Tomislav Ladan, Srećko Lipovčan, Zvonimir Lisinski, Petar Selem, Tvrtko Šercar, Ivo Škrabalo, Hrvoje Šošić, Franjo Tuđman and others). The paper, which was published every Friday on 24 pages, had a circulation of 35,000, which increased over time. The last issue reached a number of 130,000 copies, which was an incredible number for that time.

The rapid spread of the newspaper provoked a reaction by the regime, which began to see it and its publisher as political opposition. Soon the regime declared them a focal point of counterrevolutionary politics and Croatian nationalism. The paper was censored in July (No. 16, July 30), and after issue number 33 of December 3, and the fall of Croatian political leadership at a meeting in Karađorđevo a day earlier, the regime shut down the paper and its publisher. The regime also launched various types of persecution against the most prominent members of Matica hrvatska and its newspaper, from harassment at work, dismissals, to court trials and prison sentences. In 1972, editor-in-Chief Vlado Gotovac was accused of conducting hostile activity against the state and was sentenced to four years of strict imprisonment with an additional three-year loss of civil rights. The editorial board had also prepared issue no. 34 , which was ready to print, but it was never released during communist rule. This unpublished issue with the editorial ("Maintaining Hope") written by Vlado Gotovac, was obtained by émigrés and came to the hands of Jakša Kušan, who published it in the newspaper Nova Hrvatska.

The Matica hrvatska Collection at the Croatian State Archives contains copies of Hrvatski tjednik, including the censored issue of July 30, 1971, and the one with the text of the Supreme Court's decision to censor the issue on the cover. The Supreme Court's decision was printed on the cover instead of the disputed article "A Dramatic Moment for Croatia." In this article, statements by Vladimir Bakarić and Jakov Blažević on the issue of counterrevolutionary activity and the rise of nationalism in Croatia were cited. These statements were followed by critical comments by an anonymous author who rejected