Memorandum sent by Bishop Friedrich Müller to the Ministry of Religious Affairs, 1949 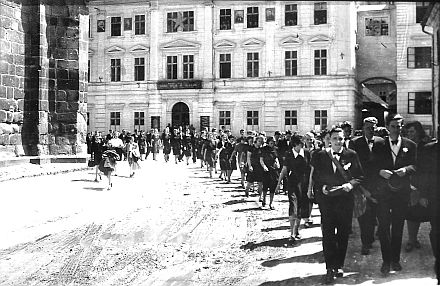 During the first decade of the communist regime, the educational system in Romania was fundamentally reformed in accordance with the Education Act of 3 August 1948, which imposed – among other things – the nationalisation of denominational schools. Faced with this difficult situation, the leadership of the Evangelical Church asked pastors to teach confirmation classes in clergy houses, churches, or state schools. Starting from the end of 1948, the local authorities received instructions to obstruct the teaching of any confirmation classes.

In reaction, the leadership of the Evangelical Church sent numerous memorandums to the Ministry of Religious Affairs. Bishop Friedrich Müller did his best to tackle this kind of interdiction, which he had already faced when Episcopal vicar in 1941. At that time, he had opposed the taking-over of denominational schools by the local Nazi organisation, the German Ethnic Group, which controlled the German minority in Romania. The confirmation classes were very important for the Evangelical Church, because without attending these classes, young people could not have been able to pass the confirmation examination and become full members of the religious community. However the state authorities considered the confirmation classes to be a tool for preserving the Church’s influence in society.
Particularly interesting is the memorandum sent by the High Consistory of the Evangelic Church A.C. in Romania to the Ministry of Religious Affairs on 28 February 1949. In this memorandum, Bishop Müller criticises the measures taken by the Securitate and Militia against the practice of confirmation classes in the village of Brădeni/Hendorf (Sibiu county). This document is remarkable for the complex theological argumentation concerning the significance of confirmation classes for Evangelical young people. In the first part of the memorandum, Bishop Müller argues that the instructions sent to local Militia stations by the Securitate Directorate of Sibiu violated the laws of the communist state, including the Constitution of 1948 and section 7 of Decree no. 177 of 1948 regarding the activity of religious denominations in Romania. In the latter text, the Bishop explains, it is plainly stated that “denominations are free to organise themselves and practice their religion if these practices do not contradict the Constitution, the security of the state, or public order.” Bishop Müller also emphasises that the banning of confirmation classes violates the basic rights of citizens, which are guaranteed by article 27 of the communist Constitution of 1948. He goes on to invoke the speeches of the minister of education, who had stated in the official newspaper Scânteia that religious denominations were free to teach the principles of their faith to the young generations of their communities. In addition, the minister had alluded to the fact that insults to “religious feelings” helped only the “enemies” of the new regime. Pursuing this official declaration, Bishop Müller ends his argument by saying that “there is no worse insult to religious feelings than banning the religious education [...] of young people.” He thus asks the Ministry of Religious Affairs to urge the leadership of the Securitate to stop the persecution against confirmation classes. In this way, Bishop Müller tried to take advantage of the inconsistencies in the policies of the communist regime, which intended on the one hand to limit the influence of the churches among young people, but on the other, to co-opt the local protestant churches.