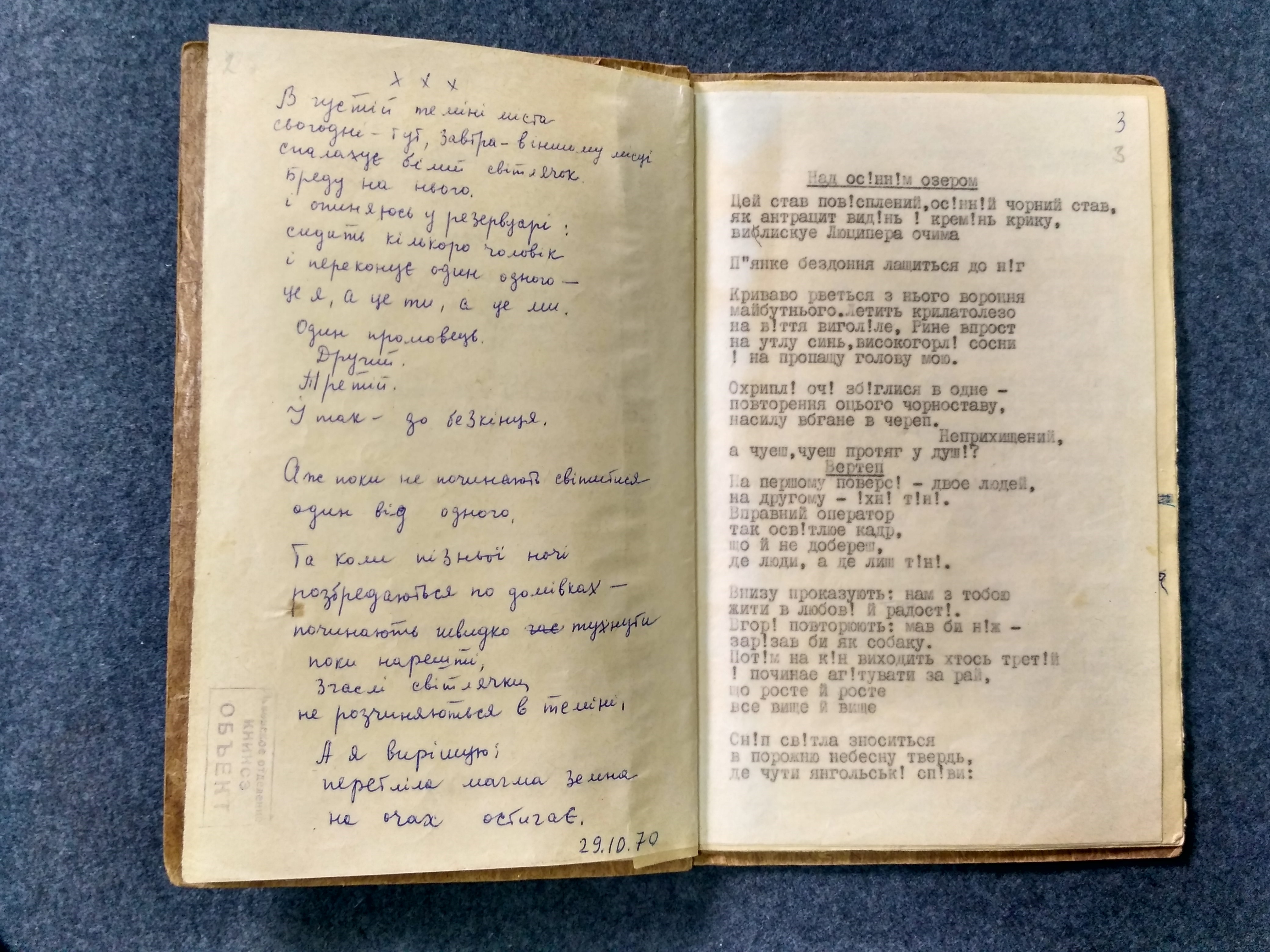 The museum has several samizdat collections by Vasyl Stus, a poet, dissident, human rights activist and figurehead of the sixtiers movement. Two collected volumes of his poetry were given as gifts to Iryna Stasiv-Kalynets and her husband Ihor Kalynets, and later donated by Stasiv-Kalynets to the museum-memorial on Lonskogo St.

The first book Winter Trees (Zymovi Dereva) was published in 1969, and given to the couple on January 9, 1972. The volume included an inscription and in-text modifications written by Stus, which, in addition to providing insights into his creative process, also marked an important turning point in the story of these Ukrainian dissidents. Within a matter of days, Stus, Stasiv-Kalynets and many others were arrested in a sweep that took place on January 12-14, 1972. The catalyst was a “vertep,” or portable puppet theatre of the nativity scene accompanied by Ukrainian Christmas carols, organized by Lviv dissidents to draw attention to the plight of compatriots who had been arrested unjustly, like Valentyn Moroz in 1970, and to raise funds to support the families they left behind. Participants walked from house to house, dressed in colorful costumes and traditional Ukrainian clothing, carrying large festive stars and other adornments.

The second volume, pictured above, The Merry Cemetery (Veselyi Tsvyntar), is also significant. As with the other book, we see Stus’ signature handwritten modifications. In the bottom left corner, there is also a stamp from the institute conducting forensic analysis for the courts. This stamp indicates that this volume was used as evidence of “anti-Soviet agitation and propaganda.” Along with a collected volume by Mykola Kholodnyj titled Cry from the Grave (Kryk z Mohyly), this volume by Stus was confiscated in many apartment searches in 1972 and were used in multiple court cases against Ukrainian dissidents arrested that year, in particular, the artist Stefaniya Shabatura and samizdat publisher Ivan Hel’. These confiscated materials were returned to their original owners, Stasiv-Kalynets and Shabatura, after independence. Though their case files remain in the SBU archives, the material evidence taken from their apartments was returned.