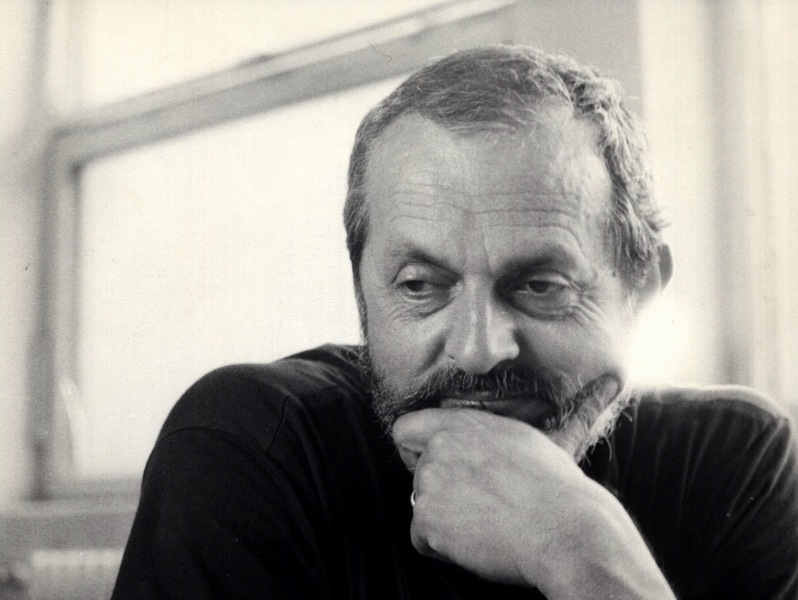 Horia Bernea (b. 14 September 1938, Bucharest – d. 4 December 2000, Paris) was one of the most well-known Romanian painters of the second half of the twentieth century. After being twice refused admission to the Academy of Fine Arts in Bucharest, he turned towards various other disciplines, declaring in order to be admitted that his father, the sociologist Ernest Bernea, who was a political prisoner, was in fact dead. He prolonged his studies in order to avoid the military service that was compulsory in the communist period, and studied mathematics and physics at the University of Bucharest (1957–1958), and then at the Technical School of Architecture (1959–1962) and the Drawing Section of the Pedagogical Institute (1962–1965). Horia Bernea was a representative of the so-called Poiana Mărului school, named after the isolated mountain village where a number of painters withdrew in the 1950s and 1960s as a place of refuge away from the control of the censors. It was not a group with a well-defined aesthetic orientation, so much as “an informal and heterogeneous group of artists, with a fluctuating composition, who had shared preoccupations and affinities” (Popica 2013). Later, from 1985, Horia Bernea was a member of the Prolog group, along with de Constantin Flondor, Paul Gherasim, Horia Paștina, Cristian Paraschiv, and Mihai Sârbulescu.

According to Andrei Pleşu, Horia Bernea achieved in his painting “a sort of earthly paradise, in which the voices of the West and of Byzantium interpenetrate.” According to his own testimony, his return to the values of Eastern Christianity was not incompatible with the avant-garde, but an experiment that combined tradition with modernity in the specific context of the Ceauşescu dictatorship. “It was more a matter of re-sacralising the act of making than of bringing religious paraphernalia into painting. This began to change a little at the point when Ceauşescu began to demolish, when atheism began to manifest itself so strongly, as it still manifests itself. And I felt the need to bear witness through faith, church towers, the cross, the processional banner, iconostases, subjects that were almost untreated in painting, precisely out of the desire to manifest Orthodoxy in a direct way.”

In the course of his career, Horia Bernea took part in many solo and group exhibitions, both national and international, and received numerous prestigious awards in his field. After the fall of communism, he was for almost a decade the director of the Museum of the Romanian Peasant (Muzeul Țăranului Român – MŢR) in Bucharest. During his time as director, he managed to bring about a spectacular and beneficial metamorphosis of the institution, which had taken over the building of the former Museum of the Romanian Communist Party. “I am dominated by a strong belief in the values of peasant art, in its validity, and by respect for those people who were unable to defend themselves,” Horia Bernea confessed. Following its transformation according to Horia Bernea’s vision, the Museum was accorded in 1996 the distinction of European Museum of the Year. “When I stated that the Museum was subversive, I had in mind a subversion of the Christian type, one that makes you feel and believe that the world is good by virtue of its purpose, beautiful by virtue of its creation, complex by virtue of its life, and spiritual by virtue of its materiality,” reflected Horia Bernea, speaking of the metamorphosis that he achieved at the Museum of the Romanian Peasant.