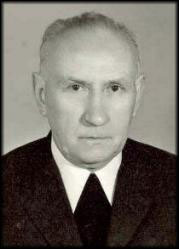 Krunoslav (Stjepan) Draganović, priest, historian and politician, was born on in Brčko on October 30, 1903. He finished primary school in Travnik and secondary school in Sarajevo. He completed five semesters at the Polytechnic in Vienna, but in 1925 he changed colleges and began to study theology in Sarajevo. He was ordained in 1928 as a priest of the Archdiocese of Vrhbosna. From 1932 to 1935, he studied ecclesiastical sciences at the Pontifical Oriental Institute in Rome, where he defended his doctoral thesis, which was published in German in 1937 (Draganović, Stjepan. Massenübertritte von zur Katholiken ortodoxiathem kroatischen Sprachgebit zur Zeit der Türkenherrschaft, Rome: Pontificium Institutum Orientalium Studiorum,  1937). After his studies, he held various ecclesiastical posts, and since 1940 he was a professor of church history at the Theological Faculty in Zagreb. As a historian, he was an expert in statistics and cartography (See Draganović, Krunoslav, Opći šematizam Katoličke crkve u Jugoslaviji (General Schematism of the Catholic Church in Yugoslavia), Sarajevo: Academy Regina Apostolorum, 1939).

After the establishment of the Ustasha regime and their Independent State of Croatia (NDH), as of May 1941, he became a member of the Colonisation Office. He founded the Committee for Slovenian refugees with the task of organising aid for around 14,500 refugees from Slovenia who fled in fear of the German occupiers. In late 1941, he was appointed a member of the Commission on Religious Conversions to the Catholic Faith. From the end of August 1943, he worked in Rome as a representative of the Church, assisting the Caritas of the Zagreb Archdiocese and the Croatian Red Cross in care for Croatian prisoners and detainees in Italy after that country’s capitulation. In the last two years of World War II, Draganović established contacts with US and British diplomats and military officials in Rome, and he sought the preservation of an independent Croatian state and tried to arrange the withdrawal of the Croatian armed forces and refugees from the NDH. With approval from Vatican, he visited prison camps in Italy and Austria in which Croatian refugees were held and assisted efforts to provide humanitarian aid, but also helped them to emigrate to other countries. In these actions, he also helped many lower officials of the Ustasha regime. At that time, he began collecting valuable documentation and testimonies on the Bleiburg tragedy and crimes committed against the Croatian people at the end of World War II and immediately thereafter.

He stayed in exile and became actively involved in political work. In 1950, he participated in the establishment of the Croatian National Committee in Munich. Since 1953, he mainly worked in the Pontifical Croatian College of St. Jerome in Rome, which he had to leave in 1958 due to the pressure by the Yugoslav authorities on Catholic bishops in Yugoslavia. The Yugoslav state had set a condition that Catholic priests from Yugoslavia could study at the Pontifical Croatian College only if Draganović left it. The Yugoslav communist authorities considered the Croatian clergy one of its main enemies, which influenced the development of church-state relations in Yugoslavia. Since Krunoslav Draganović was particularly active in the anti-communist activism, he was often a point of contention in the church-state relations (Akmadža, Sarajevo 2014). In the first half of the 1960s, negotiations between the Holy See and Yugoslavia on the normalisation of relations were conducted, and in this context in 1963 Draganović was forced to leave Italy. He soon moved to Austria. Negotiations between the Holy See and Yugoslavia on the normalisation of relations were completed by the signing of a special protocol in 1966.

From 1964 Draganović lived in Pressbaum near Vienna, where he intensified his research into the Bleiburg tragedy, and he began to write the post-war history of the Croatian people. During this period, the communist government in Yugoslavia attacked him, claiming that he was not only an Ustasha but even one of that regime’s ideologues, a war criminal and Pavelic's intimate, also accusing him of aiding a number of Ustasha and Nazi war criminals escape justice. Such unsubstantiated claims are present even today (see Aarons and Loftus 1998, Škoro 2000, Levenda 2012, Rašeta, 2014). Miroslav Akmadža (historical controversy, 2016) argues that such claims are not justified, as Draganović himself proved this during his life. The famous Nazi hunter Simon Wiesenthal (1908-2005) in 1965 called Draganović a war criminal, and in 1967 he accused him of saving Nazi criminals, including the infamous Adolf Eichmann (1906-1962), so that Drganović threatened Wiesenthal with a lawsuit and Wiesenthal withdrew his libel (Akmadža 2010, 40, Jareb 2014, 292, Akmadža 2016). According to Akmadža, Draganović did not save anybody who was subject to prosecution for war crimes by international arrest warrants, especially those who were associated with the trial in Nuremberg. Certainly, he helped some lower officials and officers from various regimes and militaries who came to seek his help. He helped people from countries where communist parties seized power without any special criteria. He did so because he did not believe that these people would be objectively prosecuted by  the communist authorities. Mostly these people came from Yugoslavia, but there was also a range of people from various other Eastern Bloc countries (Akmadža 2016). The claims that he organised the escape of Ante Pavelić were never proven (Jareb 2014, Akmadža, 2016).

In September 1967, Draganović appeared in Yugoslavia under mysterious circumstances. For some time he was in police custody and interrogated, but soon thereafter he was released and not prosecuted. War crimes charges were dropped. He spent several years in a monastery near Sarajevo, then he was in Zagreb briefly, and then in the Vrhbosna Theological Seminary in Sarajevo, where he lived and worked as a professor (under constant police surveillance) also engaging in research into church history at the Faculty of Theology until his death on July 5, 1983.

Draganović’s political actions and the rescue of people who were persecuted by the communist government in Yugoslavia were not the only reason why he was considered an enemy of the regime. As a historian, he was collecting information and documentation in order to write a book on the mass crimes of the Yugoslav Army in 1945. He deliberately accumulated his private archive, which is today scattered across multiple locations (Rome, Sarajevo, Zagreb). Copies of this part of his archive are today held as a collection at the Croatian State Archives.