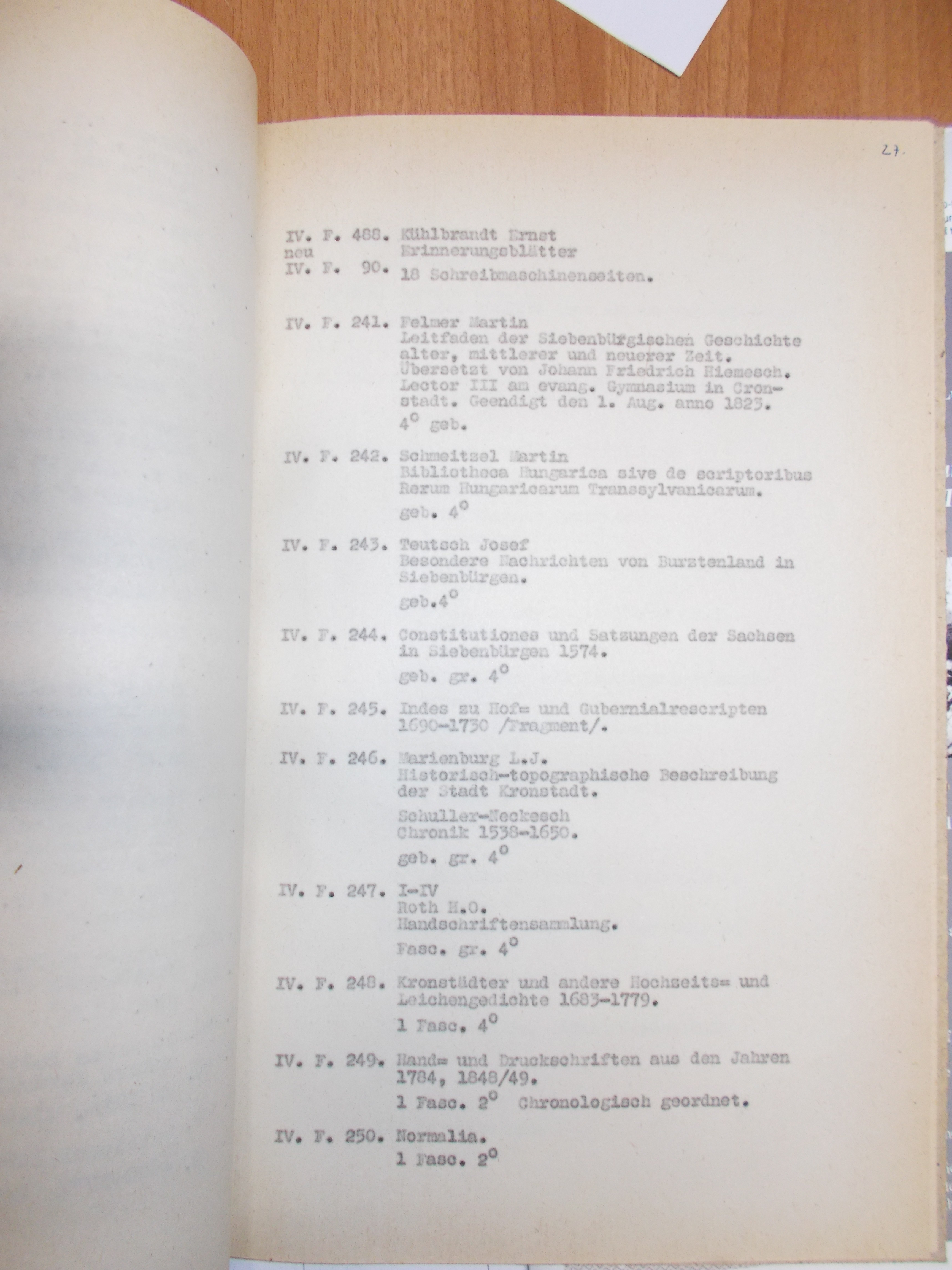 The Hans Otto Roth Collection was officially registered and archived in the Archives of the Honterus Community in 1962, when it was officially included among the manuscripts preserved in this institution. The Archives of the Honterus Community, today known as the Black Church Archives had been established in 1958, following a law of 1957 regarding the functioning of denominational archives. This institution also received the archives and the old books held by the local parish of the Evangelical Church and by the former Honterus High School, an important cultural institution of Transylvanian Saxons starting from the sixteenth century. In 1974, when a large part of the archives in the possession of the institution was taken over by the State Archives on the basis of the archive law of 1971, the Hans Otto Roth Collection was protected against this nationalisation.
Although the registers of the Archives of the Honterus Community from the 1960s prove that the Roth Collection officially entered in the possession of the institution in 1962, it is difficult to retrace the circumstances in which this event happened and who was in fact the donator. Thomas Șindilariu, a historian and archivist who works for the institution, believes that one of Hans Otto Roth’s acquaintances saved this collection and deposited it in Braşov after Roth’s arrest in 1952. Gustav Markus, the director of the Archives of the Honterus Community certainly had a key role in the acquisition of the Hans Otto Roth Collection, for this event would not have been possible without his official approval. He assumed a significant risk in including this collection created by a former political prisoner among the records of the institution he administered at a time when political repression in communist Romania was not yet over.  Besides, Hans Otto Roth’s children, Herbert and Marie Luise, had been sentenced for political crimes in the so-called Black Church Trial only four years earlier.
Klaus Popa, who edited part of the documents in this collection, asserted that Roth himself had a crucial role in the preservation of his own archives, for he deliberately sent part of his documents to Brasov and other parts to Sibiu and Cincu (Braşov county) in order to protect them from the Securitate. In order to support this assertion, Klaus Popa invoked certain notes made by Roth on the folders with documents in the collection marked “Kr.” (Kronstadt/Braşov) or “Gr.Sch.” (Groβ Schenk/Cincu) (Popa 2003, 10). This remains only a hypothesis because the Cincu church archives include no part of Hans Otto Roth’s personal archive.