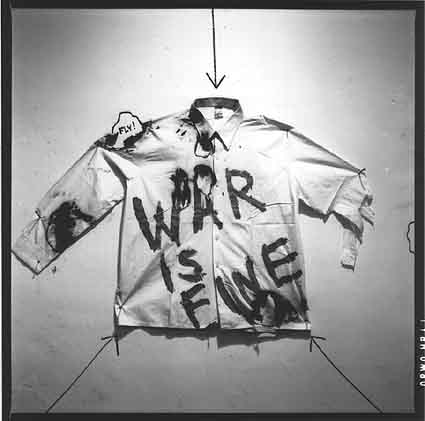 Milan Knížák is an artist associated with Fluxus and the organiser of the first Happenings in Czechoslovakia. Together with Jan Mach, Vít Mach, Sonia Švecová, Jan Trtílek, and Robert Wittmann, he founded the group Aktuální umění (Actual Art) in 1963, but the group removed the word “art” from its name in 1966 and was known as Aktual from then on. Aktual proclaimed a complete union of art and life, and it strove to awakening people’s awareness of life in art and art in life.

Liget Gallery invited Knížák to hold a solo show in 1987. The exhibition was thoroughly documented, because the gallerist knew that he would not have been able to hold a similar exhibition in Czechoslovakia. Novotny Miklós and Székelyhidi Sándor made photographs, as did Tibor Várnagy and István Halas, and György Durst made a video (the video unfortunately has been lost). Many local artists joined the action, and all participants were given a shirt for the occasion, and Knížák painted the shirts and the faces and hands of the participants.

The next day, Knížák showed his films in the Kassák Club. This was followed by a talk-show conversation between Knížák and art historian László Beke. At one point, someone ran into the room from the office with the news that Tamás Szentjóby, a well-known artist in exile, was on the phone. Knížák went to the office to take the call, and Szentjóby told him that “the greatest Czechoslovak artist has died today.” He was referring to Andy Warhol, whose death was in the news only one or two days later. Knížák had known Andy personally, so the rest of the evening became a personal commemoration.

A couple of weeks later, the gallerist brought the materials from the exhibition to Knížák in Prague, with the exception of the shirts, which Knížák had asked him not to bring. The gallerist donated the shirts to Artpool, and the documentation remained in the Liget archive.